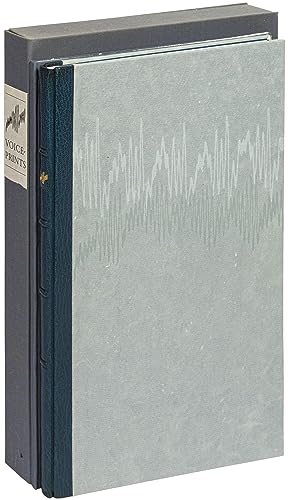 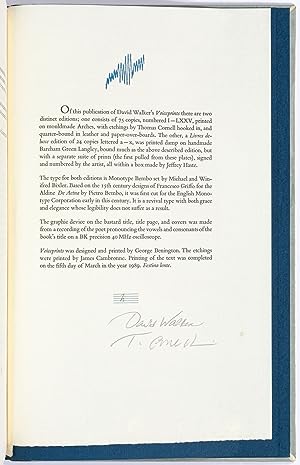 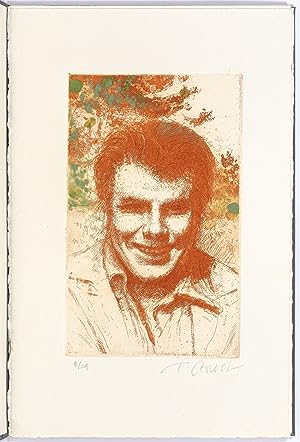 First edition, deluxe issue. Poems by David Walker. Etchings by Thomas Cornell. Quarto. 38pp. Quarter blue morocco stamped in gold, paper-covered boards. printed on handmade Barcham Green Langley paper, illustrated with five original etchings by Thomas Cornell. The spine, cover and title page reproduce a "voiceprint" from a recording of the poet pronouncing the vowels and consonants of the book's title on a precision oscilloscope. Copy letter "i" of 24 lettered copies along with an extra, separate suite of etchings ("the first pulled from these plates"), each limited to 24 lettered copies signed by David Walker and Thomas Cornell, all within a box made by Jeffrey Haste. A fine copy, beautifully printed and illustrated, in about fine clamshell case with the topedge faintly sunned and a bit of very faint spotting along the spine edge. Beautifully printed and designed by George Benington, the multi-color etchings printed by James Cambronne. Two of the etchings are individual portraits of Franz Kafka and Charles Ives. Striking etchings by the artist, Thomas Cornell, who had a one-man show at the G.W. Einstein Company in New York. Thomas Cornell is the Bowdoin College Richard Steele Professor of Studio Art. "A graduate of Amherst College, Cornell studied for a year at Yale School of Art and Architecture. In addition to Bowdoin, he has taught at the University of California at Santa Barbara and at Princeton University. He has received many awards, including a Fulbright Grant, the Louis Comfort Tiffany Award and the National Foundation on the Arts and Humanities Fellowship in 1966. He was elected to the National Academy of Design in 1983. His work is present in art books, most notably Rizzoli's Post-Modernism, The New Classicism in Art and Architecture by Charles Jencks. He has had five one-man exhibitions in New York City and seven major museum exhibitons, including a Bowdoin College Museum of Art exhibition in 1990, with a catalogue essay by Martica Sawin" (cf Bowdoin College, Visual Arts Department [Website]). Seller Inventory # 499380