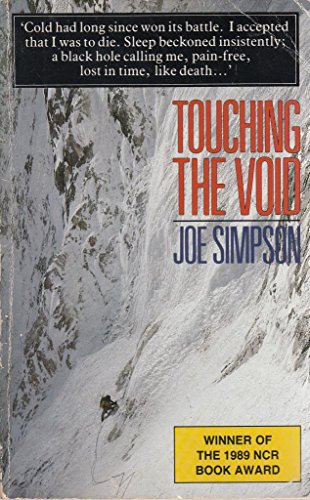 Former library book; may include library markings. Used book that is in excellent condition. May show signs of wear or have minor defects. Seller Inventory # 40459434-6

Winner of the Boardman/Tasker Award, this book tells the story of how two friends, Joe Simpson and Simon Yates, confront the greatest challenge of their lives. Together on the West Face of Siula Grande in the Peruvian Andes, they leave behind the humdrum of everyday. In June 1985 they achieved the summit before disaster struck. A few days later, Simon staggered into Base Camp, exhausted and frostbitten, to tell their non-climbing companion that Joe was dead. For three days he wrestled with guilt as they prepared to return home. Then a cry in the night took them out with torches, where they found Joe, badly injured, crawling through snowstorm in a delirium. What happened and how they dealt with the psychological traumas that resulted when Simon was forced into the appalling decision to cut the rope, makes not only an epic of survival but a powerfully moving testament of friendship.