Items related to The Top 500 Poems 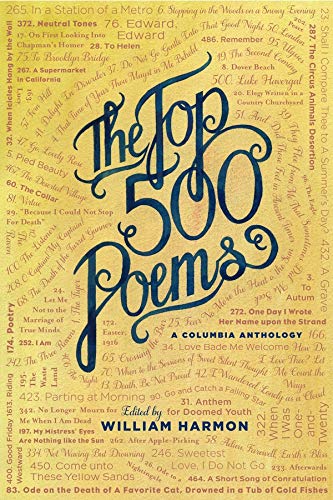 Quantity: 1
View all  copies of this book
Buy New
Price: US$ 17.41 Convert Currency
Shipping: US$ 3.00 Within U.S.A. Destination, rates & speeds
Add to basket

The Top 500 Poems offers a vivid portrait of poetry in English, assembling a host of popular and enduring poems as chosen by critics, editors, poets, and general readers. These works speak across centuries, beginning with Chaucer's resourceful inventions and moving through Shakespeare's masterpieces, John Donne's complex originality, and Alexander Pope's mordant satires. The anthology also features perennial favorites such as William Blake, William Wordsworth, and John Keats; Emily Dickinson's prisms of profundity; the ironies of Wallace Stevens and T.S. Eliot; and the passion of Sylvia Plath and Allen Ginsberg. These 500 poems are verses that readers either know already or will want to know, encapsulating the visceral power of truly great literature. William Harmon provides illuminating commentary to each work and a rich introduction that ties the entire collection together.

This is the story of poetry in English, a collection of the best 500 poems, based not on one critic's choice, not on one poet's choice, but on the collective choice of 550 critics, editors, and poets.


All items shipped within 48 hours using USPS Media or Priority Mail. Tracking numbers included with all shipments. Returns eligible within 30 days of reciept.