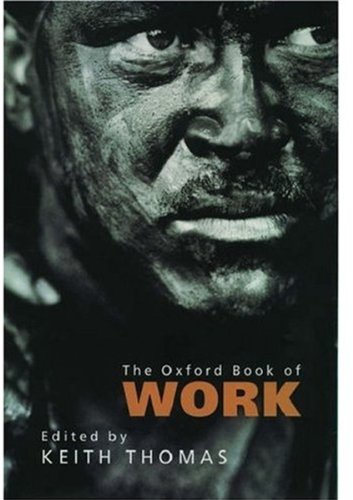 Quantity: 1
View all  copies of this book
Buy New
Price: US$ 29.35 Convert Currency
Shipping: US$ 3.00 Within U.S.A. Destination, rates & speeds
Add to basket

Title: The Oxford Book of Work

Primal curse or sacred duty? Painful drudgery or the only sure route to human happiness? Work has always evoked conflicting reactions. Yet whether we view it as a tedious necessity or embrace it as a compulsive addiction, it remains an inescapable and endlessly fascinating part of the human condition.
To illuminate the changing experience of work, this deeply enjoyable anthology draws upon more than 500 writers from classical antiquity to modern times: poets, dramatists and novelists; theologians, economists and philosophers; social investigators and journalists; diarists, letter-writers and autobiographies. Charles Aickens, Adam Smith, Anthony Trollope, Mark Twain, Washington Irving, Karl Marx, Tolstoy, George Eliot, Henry Ford, John Steinbeck, Primo Levi, Upton Sinclair, Simone de Beauvoir, Robert Frost, Tom Wolfe, Harriot Martineau, Louisa Alcott, and Dorthy Parker are among the diverse and distinguished authors included in this volume.
While Keith Thomas explores many different forms of work--from ploughing a field to sailing the sea, from mining for coal to writing a poem, and from keeping shop to practicing medicine--he does not forget housework, schoolwork, and other forms of unpaid labor. All human life is here: young people starting work, the multitudes seeking employment, the old coping with retirement, and utopians seeking to eliminate work altogether. The delights of occupation and the harshness of compulsory labor are contrasted with the pleasures of rest and idleness.
Keith Thomas's magisterial compilation and scintillating introductory essay show that work does not just provide us with the means of subsistence; it also makes possible all the pleasures and acievements of civilization. The publication date for The Oxford Book of Work is Labor Day--September 6, 1999.

We are a small mountain bookstore located in the Appalachian mountains working to support our local community. Thank you for your support.


All returns will be accepted within 30 days.

All orders can be cancelled within 48 hours prior to shippment.


All books will be shipped within 48 hours via USPS.