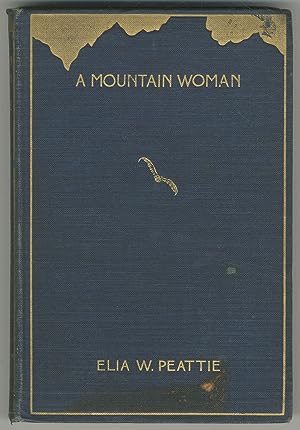 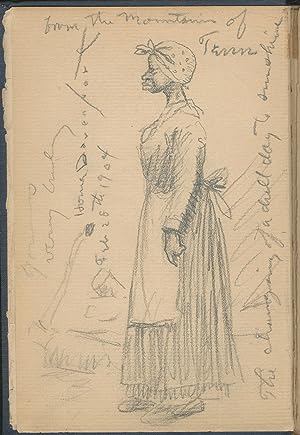 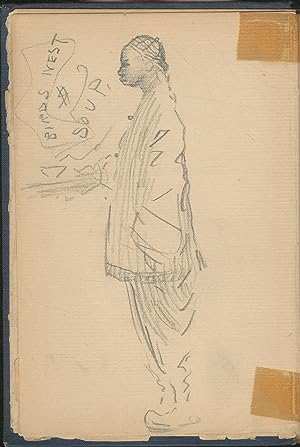 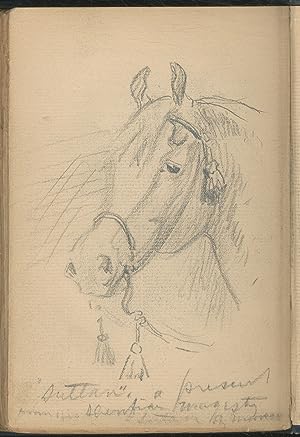 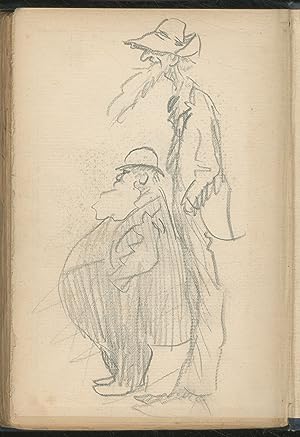 First edition. 12mo. 251pp. Topedge gilt. Blue cloth decorated in gilt, with front and rear covers designed by Bruce Rogers. Cloth is rubbed on spine, with tiny tear at crown, faint soil mark on front cover, title page has early, neat glue mend at inner hinge (where over-opened), with two early cello-tape mends on verso of dedication leaf (affixed to foreword leaf), else a very good copy. Also inscribed on the dedication leaf, in pencil, possibly in the hand of Elia W. Peattie: "To my Best Friend, May 31, 1902". The book's printed dedication states: "To My Best Friend, and kindest Critic, My Husband". Also contains the early ink signature of Olive B. Sarre on front flyleaf, and with her later ink inscription beneath: "These drawings were done by Homer Davenport on a train between New York & Buffalo, in 1904. O.B.S. April, 1953". Olive Sarre and Frank Seaman founded the Yama Farms Inn, an exclusive Catskills Resort, in Napanoch, N.Y., known to have been frequented by some of the most important and influential figures of the 20th century, including John D. Rockefeller, Henry Ford, Thomas Edison, and others. This copy has been hand-Illustrated throughout by noted political cartoonist, Homer Davenport, with twelve original pencil drawings, most of which are finely executed full-page drawings, occupying blank leaves, and inscribed by him in 1904. Many of the illustrations are racially insensitive. The second drawing (on verso of half-title page) is a caricature of an African-American woman, in full length, in profile (the drawing measures circa 6 by 4 inches, and occupies the bulk of the blank leaf opposite the title page). This drawing is inscribed by Homer Davenport, adjacent the drawing: "Yours very truly / Homer Davenport / Feb 28th, 1904." Caption in pencil holograph: "from the Mountain of Tenn. The changing of a dull day to sunshine." Another drawing is a full-page self-portrait (from the chest up, in profile), signed in full beneath: "Homer Davenport." The subjects of the other drawings, most of which are full-page, include caricatures of African-American and Asian figures, a portrait of an unnamed woman (similar in style to his self-portrait), a caricature of two figures, a drawing of a horse (from the neck up, in profile, with ornate bridal), inscribed beneath: "Sultan, a present from his [word?] majesty. [words?]" [Davenport was a pioneer in the breeding of Arabian horses, and was responsible for bringing some of the earliest desert bred Arabian horses to America]. Homer Davenport (1867-1912) was an influential editorial cartoonist/political caricaturist. He was best known for his satirical drawings and support of Progressive Era politics. His work appeared in the San Francisco Examiner, San Francisco Chronicle, and the New York Evening Journal. His caricatures of political figures he considered corrupt, such as U.S. Senator Mark Hanna, lead to an unsuccessful attempt to pass anti-cartoon legislation in the New York State Senate. Seller Inventory # 468698