Items related to Fork It Over 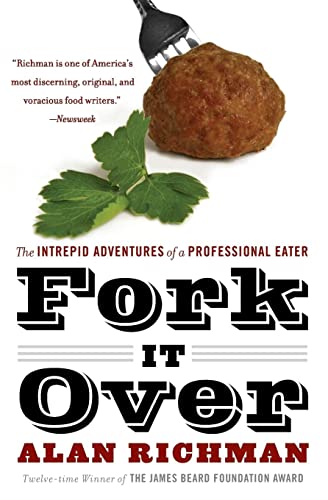 Title: Fork It Over

A hilarious series of culinary adventures from GQ's award-winning food critic, ranging from flunking out of the Paul Bocuse school in Lyon to dining and whining with Sharon Stone.

Alan Richman has dined in more unlikely locations and devoured more tasting menus than any other restaurant critic alive. He has reviewed restaurants in almost every Communist country (China, Vietnam, Cuba, East Germany) and has recklessly indulged his enduring passion for eight-course dinners (plus cheese). All of this attests to his herculean constitution, and to his dedication to food writing.

In Fork It Over, the eight-time winner of the James Beard Award retraces decades of culinary adventuring. In one episode, he reviews a Chicago restaurant owned and operated by Louis Farrakhan (not known to be a fan of Jewish restaurant critics) and completes the assignment by sneaking into services at the Nation of Islam mosque, where no whites are allowed. In Cuba, he defies government regulations by interviewing starving political dissidents, and then he rewards himself with a lobster lunch at the most expensive restaurant in Havana. He chiffonades his way to a failing grade at the Paul Bocuse school in Lyon, politely endures Sharon Stone's notions of fine dining, and explains why you can't get a good meal in Boston, spurred on by the reckless passion for food that made him "the only soldier he knows who gained weight while in Vietnam" and carried him from his neighborhood burger joint to Le Bernardin.

It seems like Alan Richman has been writing about food--certainly in GQ--like, forever. Turns out he made the switch from sports writing to food, primarily restaurant reviews, a mere 14 years ago. Fork It Over is his first collection of essays published in those years. He has a charming, easy voice; self-deprecating humor; well-honed wit; and a defined sense of what he does and does not like--about food, restaurants, cities, hotel rooms, waiters, and just about everything else. You are a passenger along for the ride, a willing listener of road stories. The car is decidedly American, the upholstery fine leather.

The collection is laid out like a classic menu of French parentage. In Amuse-Bouche, we are treated to "The Eating Life," an essay written for the book that establishes the writer-critic credentials and ground rules. His mother was a terrific cook; the author can't boil water, nor sees any need to. He's a regular guy from a regular background who can wax as poetic about Philly cheese steak as he can the most delectable and exotic of delicacies. From that point on--through Appetizers, Entrees, Sides, Cheese, Wine, and Gratuity--the reader is escorted from one side of the world to the other, to high-end restaurants and low-end dives. As the fellow traveler, the reader is never allowed to wander off from Richman's voice and perspective. He is, in fact, the axis mundi around which each and every essay revolves. Which is to say, Fork It Over is much more a book about Alan Richman than it is about food.

The essays that comprise Fork It Over appeared in major monthly magazines, one at a time. To read this body of work cover to cover is to run the risk of losing one's appetite in the middle of the meal. It's rich stuff. Delectable. Charming. And a little bit goes a long way. --Schuyler Ingle

We first started out as ?The Paperback Exchange,? a chain of physical bookstores where we would part exchange your beloved books for new stories to transport you to faraway places. However, as shopping started to evolve to online shops and marketplaces, we bid our stores goodbye to become ?PBShop.? This transition has only allowed us to blossom as we now ship thousands of titles to book lovers across the globe. We pride ourselves in being a community of local book lovers which allows our passion and devotion to shine in everything we do. In 2020 we not only celebrated our 20th birthday but our 1st birthday as being completely employee owned after becoming an E.O.T in September 2019. We are proud to be different and embrace standing apart on a book mountain by working from a virtual inventory which allows us to provide thousands of books that may be difficult to get for your bookshelf or your studies. Working with a number of different suppliers allows us to explore other avenues such as puzzles, sheet music and even stationery so we really do have something for everyone. Life is about being versatile in all realms of existence. If this is your first visit or you are a returning customer, we would like to welcome you to the PBShop family, for there is no friend as loyal as a book. We are a company who put our customers at the centre of everything we do as we understand the importance of reading because once you learn to read, you will forever be free. There are a whole lot of things in this world of ours that we are yet to explore, which is why we will forever inspire curious minds.

Returns requested beyond this time will not be authorised.

Our team will provide full instructions on how to return your order and once received our returns department will process your refund.
Please note the cost to return any...


Books are shipped from UK warehouse. Delivery thereafter is between 4 and 14 business days dependant upon your location - please do contact us with any queries you may have.