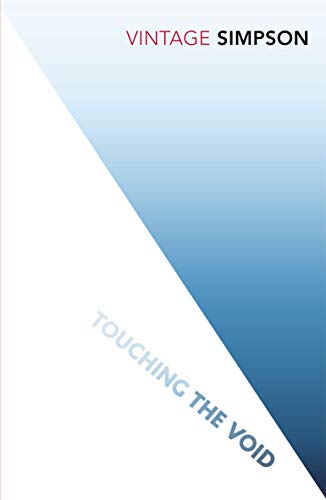 Light rubbing wear to cover, spine and page edges. Very minimal writing or notations in margins not affecting the text. Possible clean ex-library copy, with their stickers and or stamp(s). Seller Inventory # 3513379148

Synopsis: Tackling the unclimbed west face of the remote Siula Grande in the Andes, Joe Simpson and his partner Simon Yates achieved the summit before disaster struck. A few days later, an exhausted Simon staggered into base camp to tell their non-climbing companion that Joe was dead. For three days he wrestled with guilt as they prepared to return home. Then a cry in the night took them out, where they found Joe, badly injured, crawling through the snowstorm. Far from causing Joe’s death, Simon had saved his friend’s life when he was forced into the appalling decision to cut the rope.

Review: Concise and yet packed with detail, Touching the Void, Joe Simpson's harrowing account of near-death in the Peruvian Andes, is a compact tour de force that wrestles with issues of bravery, friendship, physical endurance, the code of the mountains, and the will to live. Simpson dedicates the book to his climbing partner, Simon Yates, and to "those friends who have gone to the mountains and have not returned." What is it that compels certain individuals to willingly seek out the most inhospitable climate on earth? To risk their lives in an attempt to leave footprints where few or none have gone before? Simpson's vivid narrative of a dangerous climbing expedition will convince even the most die-hard couch potato that such pursuits fall within the realm of the sane. As the author struggles ever higher, readers learn of the mountain's awesome power, the beautiful--and sometimes deadly--sheets of blue glacial ice, and the accomplishment of a successful ascent. And then catastrophe: the second half of Touching the Void sees Simpson at his darkest moment. With a smashed, useless leg, he and his partner must struggle down a near-vertical face--and that's only the beginning of their troubles.

Book Description Paperback. Condition: Good. A few small marks or stains to the page edges/pages . A tan to the page edges/pages . Ex library copy with usual stamps & stickers Good condition is defined as: a copy that has been read but remains in clean condition. All of the pages are intact and the cover is intact and the spine may show signs of wear. The book may have minor markings which are not specifically mentioned. Most items will be dispatched the same or the next working day. Seller Inventory # wbb0021429008

Book Description Condition: Good. Ships from the UK. Former library book; may include library markings. Used book that is in clean, average condition without any missing pages. Seller Inventory # GRP18549335

Book Description Paperback. Condition: Good. This book is in stock now, in our UK premises. Photos of our books are available on request (dustjacket and cover illustrations vary, and unless the image accompanying the listing is marked 'Bookseller Image', it is an Abebooks Stock Image, NOT our own). Overseas buyers please also note that shipping rates apply to packets of 750g and under, and should the packed weight of an item exceed this we reserve the right to ship via 'Economy', or request extra postage prior to fulfilling the order, or cancel. Seller Inventory # mon0000090284

Book Description Paperback. Condition: Very Good. The book has been read, but is in excellent condition. Pages are intact and not marred by notes or highlighting. The spine remains undamaged. Seller Inventory # GOR001908810

Book Description Paperback. Condition: Fair. A readable copy of the book which may include some defects such as highlighting and notes. Cover and pages may be creased and show discolouration. Seller Inventory # GOR006501745

There are 24 more copies of this book