Items related to Stalking God: My Unorthodox Search for Something to...

Home Kumar, Anjali Stalking God: My Unorthodox Search for Something to Believe In
Stock Image 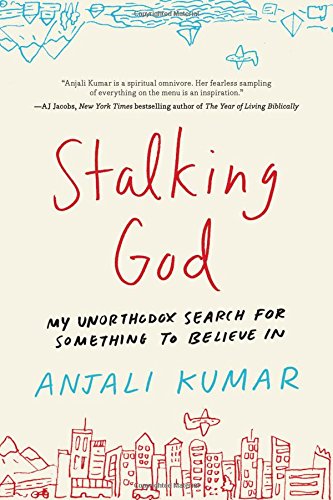 Stalking God: My Unorthodox Search for Something to Believe In

Anjali Kumar, a pragmatic lawyer for Google, was part of a rapidly growing population in America: highly spiritual but religiously uncommitted. But when her daughter was born, she became compelled to find God--or at least some kind of enlightenment.
Convinced that traditional religions were not a fit for her, and knowing that she couldn't simply Google an answer to "What is the meaning of life?", Kumar set out on a spiritual pilgrimage, looking for answers--and nothing was off limits or too unorthodox. She headed to the mountains of Peru to learn from the shamans, attended the techie haunt of Burning Man, practiced transcendental meditation, convened with angels, and visited saints, goddesses, witches, and faith healers. She even hired a medium to convene with the dead.
Kumar's lighthearted story offers a revealing look at the timeless and vexing issue of spirituality in an era when more and more people are walking away from formal religions. Narrated from the open-minded perspective of a spiritual seeker rather than a religious scholar, Kumar offers an honest account of some of the less than mainstream spiritual practices that are followed by millions of people in the world today as she searches for the answers to life's most universal questions: Why are we here? What happens when we die? Is there a God?

Anjali Kumar was the Founding General Counsel and Head of Social Innovation at Warby Parker, a leader for socially conscious businesses. Prior to joining Warby Parker, Anjali was Senior Counsel at Google, working on projects ranging from Google X to YouTube. Anjali curated and hosted the @Google Speaker Series on campus in New York City, where she also hosted a YouTube interview series "Lunchtime at Google." Anjali is currently an Adjunct Professor at Columbia Business School. She also serves as an advisor to prominent technology companies, luxury fashion brands, consumer products, and non-profit organizations, including Malala Fund, IDEO.org, and Organize.org.