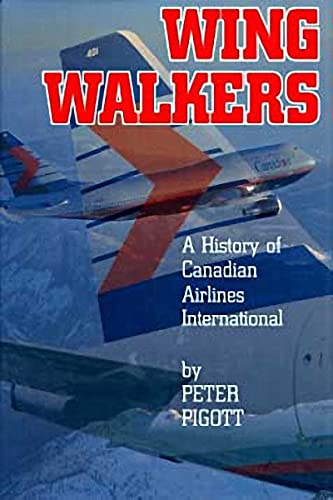 Quantity: 1
View all  copies of this book
Buy Used
Price: US$ 45.95 Convert Currency
Shipping: US$ 6.00 From Canada to U.S.A. Destination, rates & speeds
Add to basket

With unique insight and straightforward prose, Wingwalkers tells the saga of Canada's other airline, a scrappy western mongrel that, through eight decades and numerous name changes--Canadian Airways, Queen Charlotte Airlines, CP Air, PWA, Wardair and Canadian Airlines International--transformed itself from a bush flying and mining operation into an international carrier. This revised edition brings the airline's story up to date with a new final chapter chronicling the corporate dogfight in Canada's skies that led to CAI's takeover by Air Canada.

Wingwalkers begins in the early 1920s when millions of dollars were made by the brave and resourceful people who took advantage of exciting new technologies in transportation and communication. It shows how the growth of aviation in a rugged and sprawling nation depended on such larger-than-life characters as Punch Dickins, "the greatest bush pilot of them all," first commercial pilot to cross the Arctic Circle and a later company vice president; Wop May, a bush pilot who achieved fame for flying antitoxin in bitter cold to Little Red River, Alberta during a diphtheria outbreak; the charismatic Grant McConachie, an original pilot for Canadian Pacific Airlines who later led the airline through its heyday as company president; and Max Ward, a former pilot and owner of Wardair, a struggling company purchased by CAI under a storm of controversy. Accompanied by over 150 revealing photographs, the book also shows how the western-based independents found themselves in perpetual conflict with Ottawa after the creation of government-owned Trans Canada Airlines, which became Air Canada.

From early spellbinding tales of daredevil aviators to the influential decisions made by hard-nosed business men, Wingwalkers is a meticulously researched history of the important role Canada's other airline played in shaping our nation.

As the son of an airline employee, Peter Pigott grew up at the edge of airports around the world, including Santa Cruz, Bombay, London and Montreal. He attended the University of Montreal Teacher's College (B.Ed.) and Loyola College in Montreal (B.A.). and then went on to receive a M.A. from the University of Vermont in Burlington USA and a diploma in history at Oxford University in England.

Pigott joined the Canadian Department of Foreign Affairs in 1978 and has served at embassies in New York, Hong Kong, Vienna and The Hague. He returned to Ottawa in 1993 and began his writing career, specializing in books about aviation.