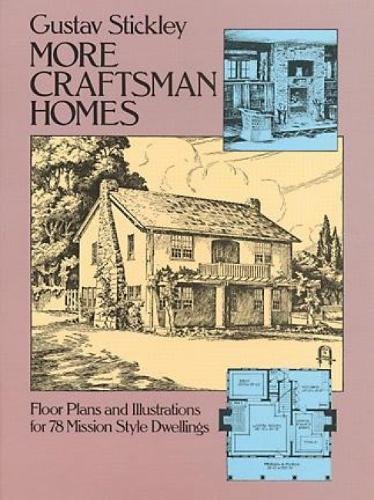 Has some wear but is in Good condition and is a very readable copy. Seller Inventory # SKU0009004

Gustav Stickley (1858–1942) — leader of the American Arts and Crafts Movement, publisher of The Craftsman, writer, innovator, and famous furniture manufacturer — created designs for a new form of American home. Based on beauty, simplicity, utility, and organic harmony, these designs were to have lasting impression on the shape, look, feel, and rationale of American domestic architecture.
Many of the features advocated by Stickley exist today: split-levels, semi-partitions, an integration of structure with natural surroundings, and the primacy of form following function. Here, in 345 crisp black-and-white illustrations, are 78 authentic Mission style dwellings. These are the plans that Stickley himself approved — reprinted directly from the original 1912 publications — and include illustrations of the exteriors and interiors, floor plans, elevations, structural suggestions, landscape designs, and Stickley's own inimitable comments.
Deeply influenced by the English Arts and Crafts Movement, especially the writings of John Ruskin and William Morris, Stickley rebelled against the outmoded architectural traditions of the Victorian age. Instead of creating rooms that were a series of separate cells, he proposed letting one living area flow smoothly into the other; instead of imitating the styles of 19th-century Europe, he proposed an original and vital American style, all the while searching for a new vocabulary of exterior and interior design. His method was the simplification of architectural space and the elimination of superfluous ornamentation; his aim was a harmonious blend of utility, economy, and aesthetics.
The ideal of the Craftsman home was an honest and beautiful building, well planned for efficient use of space and materials, built to last several generations, and within the means of the average family. Craftsman architecture adhered to four basic principles: a style of building suited to the ways people actually lived; having the best structural outline and the simplest form; made from materials that belong to the countryside in which the house was built and in harmony with the landscape; and rendered in colors that please and cheer. For Stickley, the true beauty of a building was not a matter of decoration — a something to be added — but was inherent in the very lines and masses of the structure itself.
This excellent republication of Gustav Stickley's More Craftsman Homes affords a fresh look at an influential and thoroughly American style of design and construction. Today's architects, designers, decorators, and collectors of Americana will find in the text and illustrations of this volume sufficient information and insight to appreciate the Craftsman home, the Craftsman idea, and that innovative spirit who made it possible, Gustav Stickley.

Furniture maker and architect Gustav Stickley (1858-1942) was a leading spokesman for the American Craftsman movement, a design trend descended directly from the British Arts and Crafts movement.