Items related to The Heart of the Great Alone: Scott, Shackleton, and... 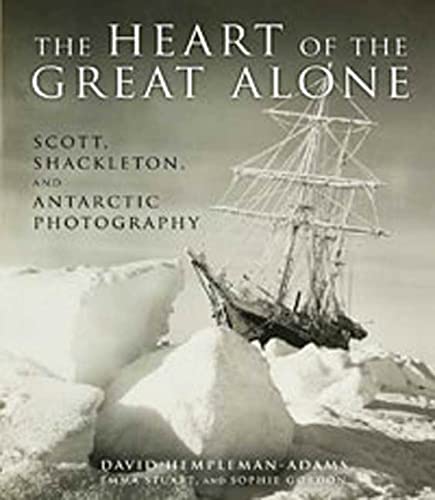 The Heart of the Great Alone: Scott, Shackleton, and Antarctic Photography

Title: The Heart of the Great Alone: Scott, ...

Among the greatest achievements in the history of photography, those of the early polar explorers surely stand out for the beauty of their images and the almost impossible conditions they encountered. None of these are more remarkable than the photographs recorded by the official chroniclers of two epic Antarctic expeditions--that of Robert Falcon Scott in 1910 which tragically resulted in his death and, four years later, and that of Ernest Shackleton, whose heroic sea journey from Elephant Island to South Georgia has become the stuff of legend. Their photographers--Herbert George Ponting and Frank Hurley--transported bulky cameras and glass plate negatives across the forbidding polar landscape to record some of the earliest images of this dramatic environment. That the photographs survived to be presented on their return to King George V is miraculous, and they have remained ever since in the Royal Collection. The Heart of the Great Alone reproduces the best of these marvelous images, some of which have never appeared in book form before--ships encased in ice floes, ice cliffs and ravines, campsites and dog sleds, and the incomparable beauty of Antarctic flora and fauna. Together they form an invaluable record of an environment that global warming has forever changed. With a superb narrative drawing on Ponting's and Hurley's writings and other unique archival material from the Royal Collection, and with extended captions for each image, this book is a unique addition to the literature of polar exploration.


Photographs from the Polar Expeditions of 1910 and 1914
Click on each photo to see the full page.