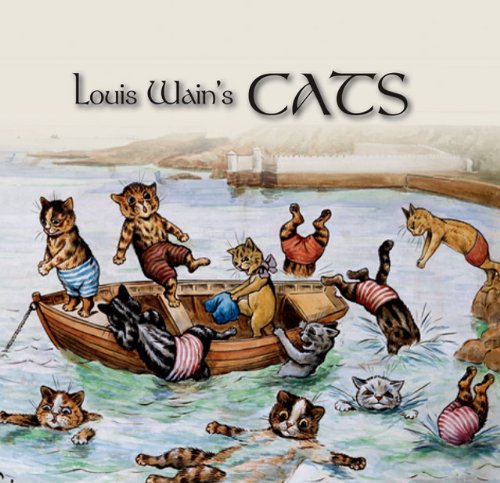 Quantity: 1
View all  copies of this book
Buy New
Price: US$ 180.00 Convert Currency
Shipping: US$ 9.50 From Canada to U.S.A. Destination, rates & speeds
Add to basket

Synopsis: The first comprehensive exhibition of Wain’s work was held at the Victoria and Albert museum in London in 1972 and since then Louis Wain has steadily become more fashionable, and collected worldwide. This new biography will show many images for the first time ever, amongst 300 plates of richness and variety, all of which are originated faithfully from the original artwork. Louis Wain who was born in 1860, was a shy and eccentric personality who became famous by the age of 40 and at his most productive, painted 600 cat pictures a year, and published his celebrated Louis Wain Annuals between 1901 and 1914. His financial difficulties, post war, contributed to a rapid decline into schizophrenia as Wain became isolated and unmanageable. In 1924 he was certified insane and admitted to Springfield hospital. Briefly forgotten he was discovered in this pauper’s asylum a year later and following an appeal involving many writers and artists, and the intervention of the Prime Minister himself, he was transferred to the new Napsbury hospital, in the Hertfordshire countryside. In these pleasant surroundings he lived on until 1935, painting ceaselessly and recreating a new and more colorful cat world. His later unpublished work is now well known to us as it reveals his schizophrenic illness: highly coloured cats become more frenzied and the pictures are often crammed with paranoid delusional writing: cats are angry and more frenetic and often in the background are the curious buildings of the mental asylums. But at times these pictures reveal a beautiful tranquility with animals living in harmony in bright utopian landscapes. About the Author: Chris Beetles has been the main popularizer of Wain’s art and has staged yearly exhibitions since 1983. He is now recognized as the world’s leading authority on Louis Wain and is regularly approached by museums, auctions and collectors worldwide to adjudicate on the vast number of forgeries coming onto the market; an inevitable consequence of increasing value on the market. A chapter on Wain forgeries will be written. Chris Beetles is an ex-practicing general practitioner specializing in the diseases of the elderly so he is also uniquely qualified to write the special addendum on art and mental illness. A full book list of Wain’s published work completes this valuable and indispensible work which will appeal to both specialist collector and cat enthusiast alike.