Skip to main content
Home [Alabama] REPRINT OF THE OFFICIAL CONSTITUTION OF THE STATE OF ALABAMA, AS... 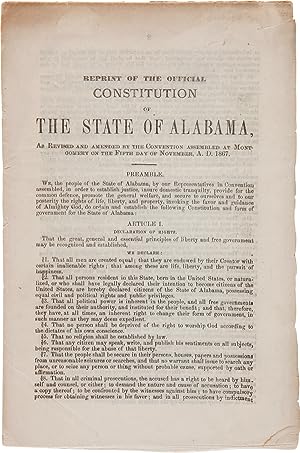 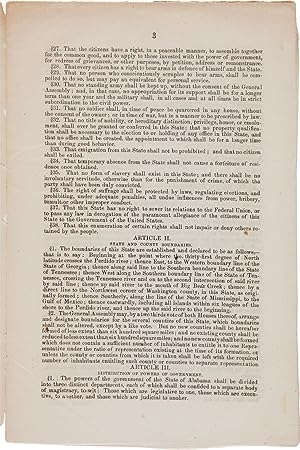 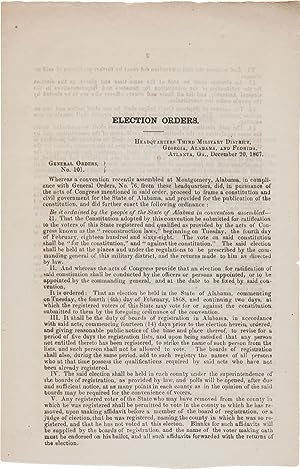 REPRINT OF THE OFFICIAL CONSTITUTION OF THE STATE OF ALABAMA, AS REVISED AND AMENDED BY THE CONVENTION ASSEMBLED AT MONTGOMERY ON THE FIFTH DAY OF NOVEMBER, A.D. 1867 [caption title]. [with:] ELECTION ORDERS [caption title]

16; 4pp. CONSTITUTION.: Original self-wrappers. First leaf detached, small corner chip in upper outer corner of first leaf, light edge wear throughout, upper edge of final leaf chipped. ELECTION ORDERS: Printed on a single folded sheet. Light edge wear. Very good. In a red cloth chemise and half morocco and cloth slipcase, spine gilt. A scarce contemporary printing of Alabama's "Reconstruction" constitution of 1867, the constitution under which the state rejoined the Union after the Civil War, accompanied by a rare printing of "Election Orders" regarding the vote on the constitution, issued by the commander in charge of the Third Military District, of which Alabama was a part. The constitution declares that all men are created equal and that "no form of slavery shall exist in this state." Also included in the declaration of rights is the statement that "this State has no right to sever its relations to the Federal Union" and that "the right of suffrage shall be protected by laws." The constitution goes on to delineate the boundaries of Alabama, describes the powers of the executive, legislative, and judicial branches, and also describes the make-up of the state's militia and the structure of its educational system. Accompanying this printing of the Alabama constitution is a two-page printing of "Election Orders," issued from the Atlanta headquarters of the Third Military District, which encompassed Georgia, Alabama, and Florida. Dated December 20, 1867 and bearing the printed signature of Brevet Major General John Pope, the two-page orders set up the framework for the Alabama constitutional ratification vote, which was scheduled to take plate in early February, 1868. This is followed by a single page printing of an "election ordinance," further relating to the vote on the Alabama constitution as well as votes for other officers (including members of Congress), and a single page printing of a "stay of execution" relating to property and "debts contracted during the Rebellion." When the vote on the Alabama constitution was finally held in early February, 1868, a majority of the conservative whites in the state boycotted the vote. Despite its overwhelming approval by those voters who actually cast a ballot, the constitution was actually defeated under the terms of the Reconstruction Act, as a majority of voters in the state did not participate. In reaction, the United States Congress eliminated the provision requiring majority participation, put the constitution into effect anyway, and readmitted Alabama into the Union. This Alabama constitution was originally published in Montgomery in 1867, and another Washington printing (a government document of nineteen pages) appeared in 1868. This private printing was likely sponsored by local champions of Radical Reconstruction, and was probably printed in late 1867 or early 1868, before the ratification vote. This edition of the constitution is relatively scarce, though most holdings also do not mention the separate accompanying ELECTION ORDERS. One possible exception is the Huntington Library copy, which collates "20pp." OCLC locates only three copies of the ELECTION ORDERS, one at Yale and two more at Harvard and the Minnesota Historical Society (both of which hold actual copies of this printing of the Alabama constitution as well). OCLC 41010439, 228679469, 228679468, 78201001. Seller Inventory # WRCAM57259

Title: REPRINT OF THE OFFICIAL CONSTITUTION OF THE ...
Publisher: Printed at the Great Republic Office
Publication Date: 1868