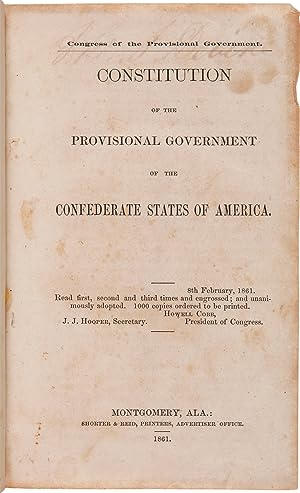 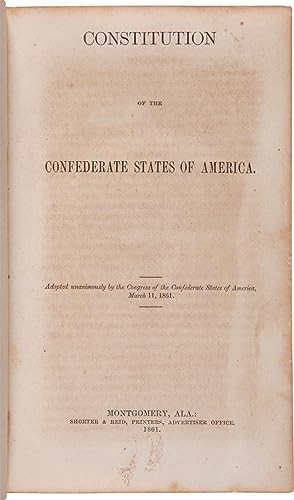 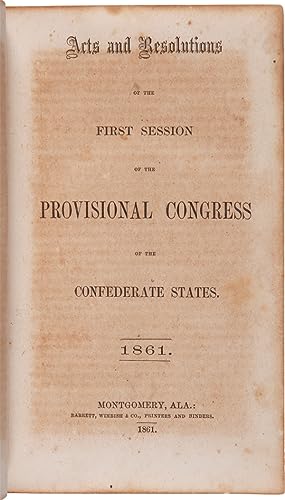 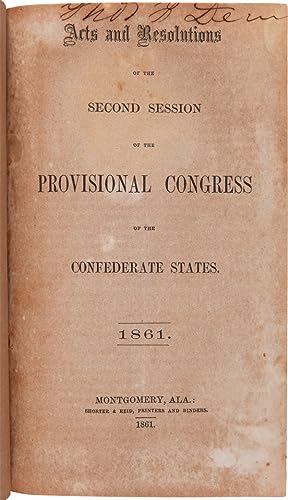 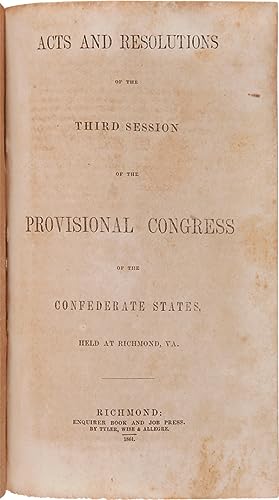 [SIX CONFEDERATE IMPRINTS, INCLUDING THE FIRST TWO CONFEDERATE CONSTITUTIONS AND THE LAWS OF THE FIRST THREE SESSIONS OF THE CONFEDERATE PROVISIONAL CONGRESS, IN A SAMMELBAND COMPILED BY TEXAS SECESSIONIST JUDGE THOMAS JEFFERSON DEVINE]

Six works bound in one volume, paginations as below. Contemporary sheep, ruled in blind. Some shelf wear, small holes in spine. Text variously foxed and tanned, signed by Thomas Jefferson Devine on front board and several pages inside. Very good. In a cloth chemise and half black morocco and grey cloth slipcase, spine gilt. An incredible collection of some of the earliest and most basic political documents of the Confederate States of America, gathered together in a volume by Thomas J. Devine, a leading Texas secessionist and jurist. Included here are the first printings of the first two versions of the Confederate constitution, as well as the official proceedings of the first three provisional Confederate congresses. It is through these proclamations, acts, and laws that the Confederacy built itself and defined itself in opposition to the United States. Interestingly, the constitutions are closely modeled on that of the United States, with clearer and more forceful defenses of slavery, but resting on the same foundations of representative government, a bicameral legislature, a multi-tiered judiciary, and a chief executive and vice president. The acts of the first three sessions of the Provisional Congress show the Confederacy in the process of building its political structure, as every bit of a civic framework is developed and enacted. Thomas Jefferson Devine (1820-90), who compiled this collection, was born in Nova Scotia and studied law in Mississippi and at Transylvania University. After receiving his degree he moved to Texas, where he settled in San Antonio with his family and began practicing law. Devine was appointed San Antonio city attorney, and then was elected a district judge, a post he held for ten years. Devine was a member of the Texas Secession Convention in 1861, and was appointed a member of the Committee of Public Safety. He supervised the surrender of federal troops and supplies in Texas. He was appointed a judge of the Confederate Western District of Texas, and also served as a diplomatic representative for the Confederacy in Mexico. At the end of the Civil War he returned to Mexico so as not to have to take the oath of allegiance to the federal government, but when he returned to Texas he was arrested and imprisoned in New Orleans. Along with Jefferson Davis and Clement Clay, Devine was one of only three Confederates charged with treason during the war. He was pardoned without a trial, and his citizenship was restored in 1867. As a prominent Texan and Confederate jurist, the political and legal documents Devine collected in this volume would have been of the utmost interest and importance to him. 1) [Confederate Imprint]: CONGRESS OF THE PROVISIONAL GOVERNMENT. CONSTITUTION OF THE PROVISIONAL GOVERNMENT OF THE CONFEDERATE STATES OF AMERICA. Montgomery, Al.: Shorter & Reid, 1861. 15,[1]pp. The first official publication of the Confederate States of America, this is the first version of the Confederate constitution, as adopted on February 8, 1861. The secession convention, with representatives from six states (South Carolina, Georgia, Florida, Alabama, Mississippi, and Louisiana), met in Montgomery on Monday, February 4 and crafted this constitution in short order. They modeled their constitution on that of the United States, but with several important differences: the right to own slaves was more explicitly stated; cabinet officers were to have seats on the floors of both legislative houses; the importation of slaves was prohibited; the President (who served for six years and was limited to one term) was granted a line item veto; the fugitive slave law was strengthened; and slavery in Confederate territories was protected. Printed in an edition of 1000 copies, this is a seminal document in the political history of the Confederacy. PARRISH & WILLINGHAM 1. STREETER SALE 1274. De RENNE II, p. 619. 2) [Confederate Imprint]: CONSTITUTION OF THE CONFEDERATE STATES OF AMERICA. Montgomery, Al.: Shorter & Reid, 186. Seller Inventory # WRCAM57257