Items related to Flora: A Novel 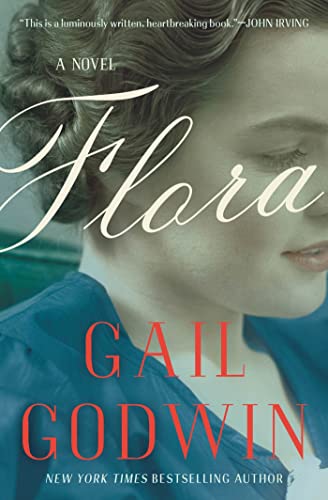 Ten-year-old Helen and her summer guardian, Flora, are isolated together in Helen's decaying family house while her father is doing secret war work in Oak Ridge during the final months of World War II. At three Helen lost her mother and the beloved grandmother who raised her has just died. A fiercely imaginative child, Helen is desperate to keep her house intact with all its ghosts and stories. Flora, her late mother's twenty-two-year old first cousin, who cries at the drop of a hat, is ardently determined to do her best for Helen. Their relationship and its fallout, played against a backdrop of a lost America will haunt Helen for the rest of her life.

This darkly beautiful novel about a child and a caretaker in isolation evokes shades of The Turn of the Screw and also harks back to Godwin's memorable novel of growing up, The Finishing School. With its house on top of a mountain and a child who may be a bomb that will one day go off, Flora tells a story of love, regret, and the things we can't undo. It will stay with readers long after the last page is turned.

Gail Godwin is a three-time National Book Award finalist and the bestselling author of twelve critically acclaimed novels, including A Mother and Two Daughters, The Good Husband, Father Melancholy's Daughter, and Evensong. She is also the author of The Making of a Writer: Journals, 1961--1963, the first of two volumes, edited by Rob Neufeld. She has received a Guggenheim Fellowship, National Endowment for the Arts grants for both fiction and libretto writing, and the Award in Literature from the American Academy of Arts and Letters. She lives in Woodstock, New York. Visit her website at www.gailgodwin.com.


Orders usually ship same or next business day. If you place an expedited order for a heavy or over-sized book, we may contact you to request that you cover the extra shipping cost.