Items related to The Art of Conversation (Game) 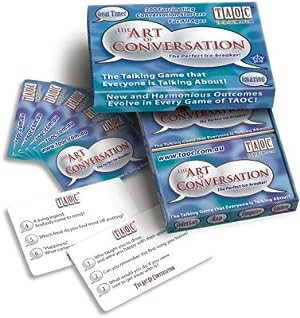 The Art of Conversation (Game)

Title: The Art of Conversation (Game)

Save up to 90% on your favorite items at BargainBookStores.com! Our 20,000 square foot warehouse in Grand Rapids, Michigan is filled with hundreds of thousands of books and consumer goods, all at the lowest prices! Weżve been serving internet customers with great deals since 2001. All books ship from Grand Rapids, Michigan. 100% Customer Satisfaction Guaranteed We want to ensure your satisfaction. If you are dissatisfied with your purchase or shopping experience, we would like to hear from you. Please contact us by email: cs@bargainbookstores.com. Please be sure to include your contact information and order number. We do not charge a restocking fee for returns. Your Privacy BargainBookStores.com does not provide, sell or market customer information to other businesses or organizations.


BargainBookStores guarantees 100% Customer Satisfaction. We ship worldwide and offer a variety of shipping methods to meet your needs. Please place your order directly via ABEBooks.com. We accept payment by MasterCard and Visa. For more information, contact us by email at cs@bargainbookstores.com. Full contact info is below:


We will ship to all domestic and most international destinations.

Please note: Shipping times are estimated and are not guaranteed by BargainBookStores.