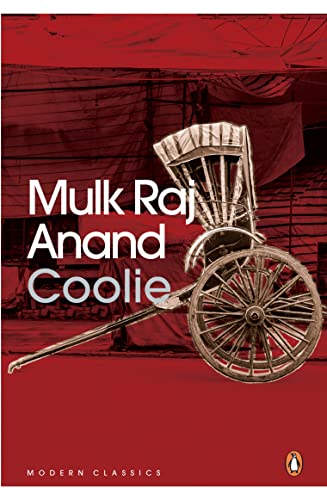 Synopsis: Coolie portrays the picaresque adventures of Munoo, a young boy forced to leave his hill village to fend for himself and discover the world. His journey takes him far from home to towns and cities, to Bombay and Simla, sweating as servant, factory-worker and rickshaw driver. It is a fight for the survival that illuminates, with raw immediacy, the grim fate of the masses in pre-Partition India. Together with Untouchable, Coolie places Mulk Raj Anand among this century's finest Indian novelists writing in English.

Book Description Paperback. Condition: Used; Good. **SHIPPED FROM UK** We believe you will be completely satisfied with our quick and reliable service. All orders are dispatched as swiftly as possible! Buy with confidence! Greener Books. Seller Inventory # 1614471

Book Description Condition: Good. A+ Customer service! Satisfaction Guaranteed! Book is in Used-Good condition. Pages and cover are clean and intact. Used items may not include supplementary materials such as CDs or access codes. May show signs of minor shelf wear and contain limited notes and highlighting. Seller Inventory # 0140186808-2-4

Book Description Condition: Fair. Independent family-run bookstore for over 50 years! Buy with confidence! Book is in acceptable condition with wear to the pages, binding, and some marks within. Seller Inventory # bk0140186808xvz189zvxacp

Book Description Paperback. Condition: GOOD. Spine creases, wear to binding and pages from reading. May contain limited notes, underlining or highlighting that does affect the text. Possible ex library copy, will have the markings and stickers associated from the library. Accessories such as CD, codes, toys, may not be included. Seller Inventory # 3474628230

There are 14 more copies of this book