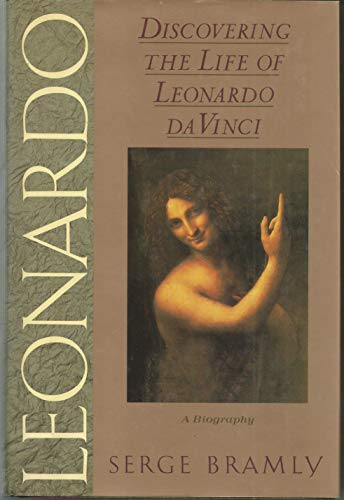 Recreates the life and times of Leonardo da Vinci, capturing his insecurities about his place in society and describing his ferocious desire to understand the mysteries of the universe

Unlike earlier biographers, many of whom considered Leonardo divine or demonic, French novelist and biographer Bramly offers the image of a gifted, methodical, rational, emotionally simple craftsman whose personal life remains wrapped in mysteries--some intentional and others, such as the loss of his grave and many of his works, the results of time and circumstance. Born in 1452, illegitimate son of a notary and a peasant girl, contemporary of Machiavelli, Columbus, Erasmus, and Michelangelo, Leonardo appears here as only one among many geniuses, though distinguished by engaging eccentricities: a playful good nature; unusual personal beauty; a preoccupation with hygiene; an inability to complete or even begin the many commissions he won in painting and sculpture; a disregard for politics in a stormy age during which his livelihood depended on being allied with political power; and a form of dyslexia that made him write from right to left and in reverse, rendering his many notebooks nearly incomprehensible. A homosexual, he is believed to have been chaste except for relations he may have had with a young boy he adopted. More preoccupied with mechanics than art, Leonardo designed cities that were never built, flying machines that could not be built, and invented a theory of color--yet could not complete the Mona Lisa or, for that matter, The Last Supper, itself an experiment in fresco. Bramly presents Leonardo much as he represented himself, a collection of lights, names, lines, dates that merely introduce an artist who, judging from his self-portrait with its averted eyes and shadows, as Bramly points out, does not want to be known. Still, there must be more to know: surely Bramly could have shared more of Leonardo's voice from the many notebooks that he clearly read and claims to understand. And, while Bramly belittles Freud's reading of Leonardo's psyche, he offers little to replace it, indeed almost no insight into his subject's inner life or the sources of his creative energy. (Four pages of color photos; 75 b&w photos--not seen.) -- Copyright ©1991, Kirkus Associates, LP. All rights reserved.