Items related to Life As We Knew It: Our world ends tonight (The Last... 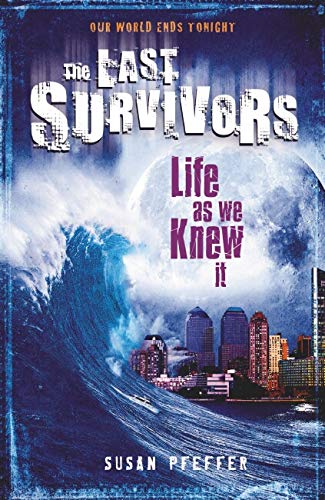 Life As We Knew It: Our world ends tonight (The Last Survivors)

Quantity: 1
View all  copies of this book
Buy Used
Price: US$ 3.89 Convert Currency
Shipping: US$ 12.14 From United Kingdom to U.S.A. Destination, rates & speeds
Add to basket

**SHIPPED FROM UK** We believe you will be completely satisfied with our quick and reliable service. All orders are dispatched as swiftly as possible! Buy with confidence! Greener Books. Seller Inventory # mon0002147759

Title: Life As We Knew It: Our world ends tonight (...

Miranda's disbelief turns to fear in a split second when an asteroid knocks the moon closer to the earth. How should her family prepare for the future when worldwide tsunamis wipe out the coasts, earthquakes rock the continents, and volcanic ash blocks out the sun? As summer turns to Arctic winter, Miranda, her two brothers, and their mother retreat to the unexpected safe haven of their sunroom, where they subsist on stockpiled food and limited water in the warmth of a wood-burning stove. In her journal, Miranda records the events of each desperate day, while she and her family struggle to hold on to their most priceless resource--hope." ""Includes a teaser to the companion novel," The Dead and the Gone.

Greener Books is an enterprise with a particular passion for supporting the environment and sustainability! Our dedicated Customer Care Team are here to assist with your requirement. We believe in equitable and exceptional service to our customers.


Greener Books endeavours to provide each and every customer with an excellent
shopping experience, backed by our satisfaction guarantee.


Orders are usually shipped within 24 hours of confirming sale. Shipping costs are based on books
weighing 2.2 LB, or 1 KG. If your book order is heavy or oversized, we may contact
you to let you know extra shipping is required.