Skip to main content
Home Yazoo Land Fraud] IN SENATE OF THE UNITED STATES.IN PURSUANCE OF THE ACT OF ... 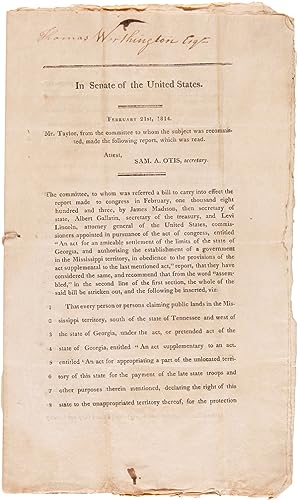 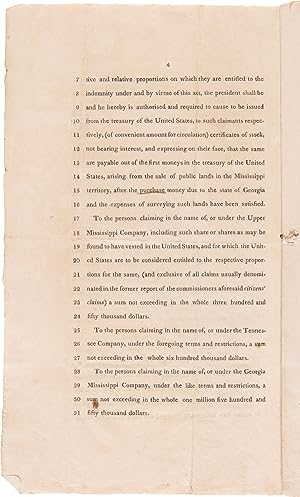 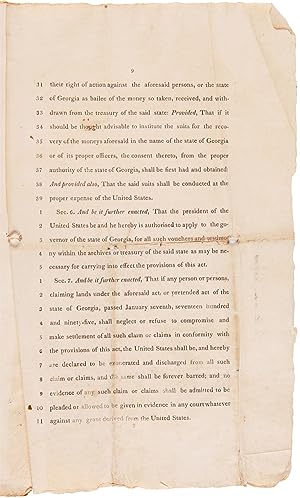 IN SENATE OF THE UNITED STATES.IN PURSUANCE OF THE ACT OF CONGRESS, ENTITLED "AN ACT FOR AN AMICABLE SETTLEMENT OF THE LIMITS OF THE STATE OF GEORGIA, AND AUTHORISING THE ESTABLISHMENT OF A GOVERNMENT IN THE MISSISSIPPI TERRITORY." [caption title and portion of opening text]

9pp. Folio. Gathered signatures, bound with a single stitch. Old folds, minor staining, two small holes in last leaf not touching text. Ink ownership signature of "Thomas Worthington, Esq." at top of first page. Overall very good. Untrimmed. A Senate slip-bill printing of language eventually included in the final act of the United States Congress governing the Yazoo land scandal. In 1795, the Georgia legislature granted much of the land in the present state of Alabama to four land companies, which in turn sold shares to numerous investors all over the country; however, charges of bribery were raised and the grant was rescinded the following year. This left the investors high and dry, and many of them sued Georgia to prevent the rescinding of the sale which had made their investments worthless. The state of Georgia tried to void the fraud-induced sales, but in 1810 the United States Supreme Court ruled in Fetcher v. Peck that the voiding of the sales was unconstitutional, the first time in American history that the federal court had overridden a state law. Finally, in 1814, the federal government took over the lands and paid off the claims. The present work is concerned with paying off those claims. By 1814, the federal government took charge of the claims involved in the Yazoo land scandal, in order to settle the issue once and for all. The proposed legislation here amends the 1803 Act of Cession, and was issued as a committee report by Senator John Taylor of South Carolina, who submitted it to the Secretary of the Senate, Samuel A. Otis on February 21, 1814. The language here acts much like a modern-day class action lawsuit. The first section calls for all claimants to Yazoo lands to report claims by a given date. The second section establishes a board of commissioners to examine the claims. The longest section, Section 3 is the most interesting. In it, the government proposes to send approved claims to the president, who will then issue stock certificates payable on the U.S. Treasury, "arising from the sale of public lands in the Mississippi territory, after the purchase money due to the state of Georgia and the expenses of surveying such lands have been satisfied." The act then assigns dollar amount totals to be paid to the four original stock companies involved in the Yazoo land case, with a proportion of which intended for each investor still holding a valid claim. The land companies cited here by name are the Upper Mississippi Company, the Tennessee Company, the Georgia Mississippi Company, and the Georgia Company, along with individuals who invested personally and still have outstanding personal claims. The remainder of Section 3 lays out the rules and procedures for receiving claims, along with another passage (also labeled section three, stipulating that 95% of every hundred dollars to be paid in stock certificates, with the remaining five dollars in cash). The last four sections involve moneys owed to the state of Georgia, the procedures for recovery for funds already received by claimants, the authorization of access to the president for "all such vouchers and testimony within the archives or treasury" regarding this matter, and finally, a provision that claimants must follow the decisions made in this act or forfeit their claims altogether. The final act governing the Yazoo land fraud was passed on March 31, 1814, just over a month after the present slip bill was circulated in Congress. "An act providing for the indemnification of certain claimants of public lands in the Mississippi territory" was approved by Congress, with the final bill consisting of nine sections. Much of the current slip bill is included or incorporated in the final legislation, with both sections labeled section three in the slip bill broken out into sections three and four in the final bill, and with an additional section (section eight) in the final bill covering a minimum age requirement of twenty-one years of age for claims (or procedures for guardianships in cases where the claimants are under age). The same four land companies are named in section three of the final act, and the totals awarded to each remain the same. The present slip-bill belonged to Thomas Worthington, who signed his name at the top of the first page. Worthington was at this time serving his second term as a United States Senator from Ohio. He would resign from the Senate later this same year, on December 1, 1814, after being elected Governor of Ohio. The work here includes a handful of ink emendations, including a couple of dates written in ink in Section 2. These were presumably added by Worthington as he consulted with his colleagues in the Senate on the legislation. The slip bill is docketed on the verso of the final leaf, "Bill on Yazoo," presumably in Worthington's hand. Shaw and Shoemaker list two pieces of slightly-earlier legislation relating to the same act, both of which are held by institutions listing them in OCLC. The present document is not listed in OCLC, and likely only survived in the hands of Senate committee members, like the present copy. Seller Inventory # WRCAM56889

Title: IN SENATE OF THE UNITED STATES.IN PURSUANCE ...