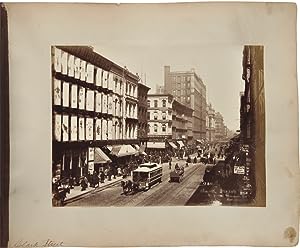 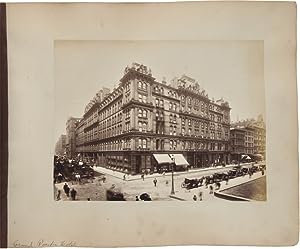 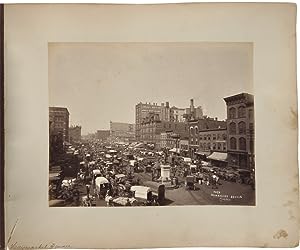 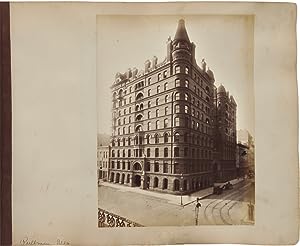 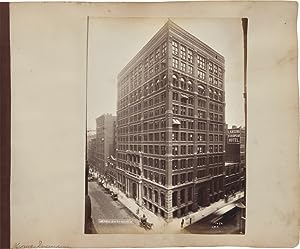 ALBUM CONTAINING 154 ALBUMEN PHOTOGRAPHS OF CHICAGO BY A NOTED PHOTOGRAPHER, INCLUDING IMPORTANT ARCHITECTURAL IMAGES, AS WELL AS IMAGES RELATING TO THE PREPARATIONS FOR THE 1893 WORLD'S FAIR, THE STOCKYARDS AS DESCRIBED BY UPTON SINCLAIR, AND MORE]

152 albumen photographs, most 7 x 9 inches, mounted recto and verso of each leaf within the album. Images captioned in manuscript on the mount below the image, many signed in white ink or in the negative by Taylor. Oblong folio. Expertly bound to style in half dark purple morocco and period cloth, spine lettered in gilt, marbled endpapers. Very good. A major photographic record of the city of Chicago and its architecture in the late 19th century, almost entirely the work of the significant photographer, John W. Taylor, with his imprint in the negative. Taylor was a bookseller and stationer before advertising himself as a commercial photographer in the late 1880s. He concentrated his work on Chicago-area architecture and city infrastructure. Today he is recognized as a pioneering photographer of architecture, working in Chicago at the very beginning of the skyscraper era. This superb photograph album presents a fairly comprehensive view of Chicago's architecture and life during one of the city's most interesting and vibrant periods, from the highest of the skyscrapers to the interiors of pig pens in the stockyards, with numerous residences, parks, lush interiors, the 1893 World's Fair, and more in between. Taylor's importance as one of the earliest significant architectural photographers is addressed in Peter Bacon Hales' SILVER CITIES: PHOTOGRAPHING AMERICAN URBANIZATION, 1839-1939: "Photographers of the older generation managed to retain their identities even as they adjusted to their more prosaic role as visual adjuncts to the architects who designed the buildings they photographed. J.W. Taylor of Chicago, for example, made an extensive survey of the 'modern' buildings of Chicago and its environs, many of which traveled throughout the globe as architects and engineers converged on the city in the later 1800s and beyond to see the miracle of the Chicago style of building. Taylor's pictures went as far as Melbourne, Australia, in the collection of Australian architect E.G. Kilburn, who made his pilgrimage to the architects' mecca in 1889. Kilburn stared, sketched, and took notes; then he brought back photographs by Taylor of everything from the Pullman company town to the Palmer House." Chicago has been an especially important architectural center since the period represented in this collection. After the Great Chicago Fire of 1871 destroyed most of the buildings in the downtown area, a special class of architects and engineers flocked to the city, resulting in an architectural boom unequaled in the history of 19th-century urban development. Hallowed names such as Louis Sullivan, Dankmar Adler, John M. Van Osdel, Daniel Burnham, William W. Boyington, William LeBaron Jenney, John Wellborn Root, William Holabird, Martin Roche, Edward Baumann, Harris W. Huel, Solon Spencer Beman, and Clinton J. Warren stamped their unique architectural character on the Chicago landscape. Each of these architects is amply represented in the photographs contained herein. There is even one photograph of the magnificent lobby of the Rookery Building, considered the grandest lobby in Chicago at the time. This view is especially interesting to architectural historians because this interior was remodeled a short time later, in 1905 by Adler & Sullivan's former head draftsman, Frank Lloyd Wright. The late 19th century was also a transitional time in building construction, when architects were beginning to leave behind cast iron frames and experiment with steel- frame construction and large areas of plate glass, especially in the "Commercial Style" made famous by Sullivan and others in the Chicago School. As a result, some of the earliest modern skyscrapers are found in Chicago. A general summary of the photographs in the album is as follows: forty-two buildings including the Masonic Temple (the tallest skyscraper in the world at the time), the Woman's Temple, the Rookery Building, the Chamber of Commerce, the Monadnock Building, the Northern Hotel, the Home Insurance Building, the Tacoma Building, the Caxton Building, the Pullman Building, the Oakland Hotel, the Grand Pacific Hotel, Palmer House, the Auditorium Building, Marshall Field's, the Lester Building, the Hotel Metropole, Libby Prison, the New Regiment Armory, depots, and churches; seven downtown street scenes; seventeen residential streets including Lake Shore Drive and Michigan Avenue, and residences of prominent citizens including Potter Palmer and Lambert Tree; twenty parks, pavilions, and recreation scenes; three of Grant Monument and its unveiling; ten Lincoln Park scenes, some with animals; three of Garfield Park; ten featuring World's Fair building construction; nine views of the October 1892 World's Fair dedication, showing ceremonies and a large parade; two scenes of boating; twelve views of stockyards and meat processing; six exterior and interior views of an auditorium; eight interiors including Palmer House and a bank; and three scenes of horse racing at Washington Park. Taylor's photographs reside in the collections of the Art Institute of Chicago (fifty-six images) and the Chicago History Museum (150 images). The subject matter of those collections, and the present work do not overlap significantly, a testament to the prodigious nature of Taylor's output. For example, this collection has a significant number of images related to the World's Columbian Exposition (a.k.a. the Chicago World's Fair) of 1893; the Chicago History Museum collection contains no images from this monumental event in Chicago's history. A truly remarkable record of Chicago architecture by a significant photographer. Seller Inventory # WRCAM49582