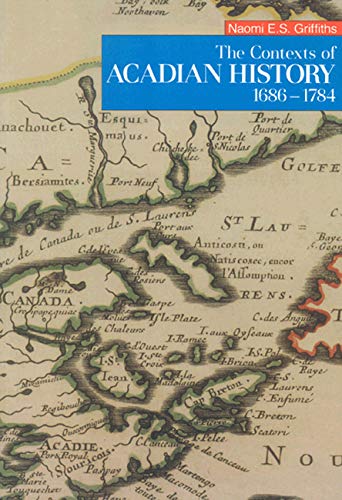 Quantity: 1
View all  copies of this book
Buy Used
Price: US$ 18.00 Convert Currency
Shipping: US$ 9.50 From Canada to U.S.A. Destination, rates & speeds
Add to basket

In 1600 there were no such people as the Acadians; by 1700 the Acadians, who numbered almost 2,000, lived in an area now covered by northern Maine, New Brunswick, Nova Scotia, Prince Edward Island, and the southern Gaspé region of Quebec. While most of their ancestors had come to live there from France, a number had arrived from Scotland and England. Their relations with the original inhabitants of the region, the Micmac and Malecite peoples, were generally peaceful. In 1713 the Treaty of Utrecht recognized the Acadian community and gave their territory -- on the frontier between New England and New France -- to Great Britain. During the next forty years the Acadians continued to prosper and to develop their political life and distinctive culture. The deportation of 1755, however, exiled the majority of Acadians to other British colonies in North America. Some went on from their original destination to England, France, or Santo Domingo; many of those who arrived in France continued on to Louisiana; some Acadians eventually returned to Nova Scotia, but not to the lands they once held. The deportation, however, did not destroy the Acadian community. In spite of a horrific death toll, nine years of proscription, and the forfeiture of property and political rights, the Acadians continued to be part of Nova Scotia. The communal existence they were able to sustain, Griffiths shows, formed the basis for the recovery of Acadian society when, in 1764, they were again permitted to own land in the colony. Instead of destroying the Acadian community, the deportation proved to be a source of power for the formation of Acadian identity in the nineteenth century. By placing Acadian history in the context of North American and European realities, Griffiths removes it from the realms of folklore and partisan political interpretation. She brings into play the current historiographical concerns about the development of the trans-Atlantic world of the seventeenth and eighteenth centuries, considerably sharpening our focus on this period of North American history.