Items related to The Great Turning: From Empire to Earth Community 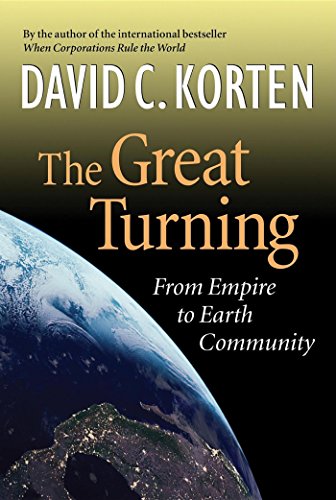 The Great Turning: From Empire to Earth Community

Quantity: 1
View all  copies of this book
Buy Used
Price: US$ 10.00 Convert Currency
Shipping: US$ 3.50 Within U.S.A. Destination, rates & speeds
Add to basket

Title: The Great Turning: From Empire to Earth ...

In his classic international bestseller, When Corporations Rule the World, David Korten exposed the destructive and oppressive nature of the global corporate economy and helped spark a global resistance movement. Now, he shows that the problem runs deeper than corporate domination—with far greater consequences.

Here, Korten argues that corporate consolidation of power is merely one manifestation of what he calls “Empire”: the organization of society through hierarchy and violence that has largely held sway for the past 5,000 years. Empire has always resulted in misery for the many and fortune for the few, but now it threatens the very future of humanity. Korten points to global terrorism, climate change, and rising poverty as just a few of the signs that the burdens of Empire now exceed what people and planet will bear.

The Great Turning traces the roots of Empire to ancient times and charts the long evolution of its favored instruments of control, from monarchies and bureaucracies to the transnational institutions of the global economy. Korten also tells the parallel story of the attempt to develop a democratic alternative to Empire, beginning in Athens and continuing with the founding of the United States of America. But this remains an unfinished project—Korten documents how elitists with an imperial agenda have consistently sought to undermine the bold and inspiring “American experiment,“ beginning in the earliest days of the republic and continuing to the present day.

Empire is not inevitable, not the natural order of things—we can turn away from it. Korten draws on evidence from sources as varied as evolutionary theory, developmental psychology, and religious teachings to make the case that “Earth Community”—a life-centered, egalitarian, sustainable way of ordering human society based on democratic principles of partnership—is indeed possible. And he details a grassroots strategy for beginning the momentous turning toward a future of as-yet-unrealized human potential. The Great Turning illuminates our current predicament, provides a framework for grasping the potential of this historic moment, and shows us how to take action for the future of our planet, our communities, and ourselves.

The Great Turning
From Empire to Earth Community
By David C. Korten

"We stand at a critical moment in Earth's history, a time when humanity must choose its future.... To move forward we must recognize that in the midst of a magnificent diversity of cultures and life forms we are one human family and one Earth Community with a common destiny."
--The Earth Charter (2000)

David Korten's classic bestseller, When Corporations Rule the World was one of the first books to articulate the destructive and oppressive nature of the global corporate economy. Now, ten years later, Korten shows that the problem runs deeper than corporate domination, and with far greater consequences.

In The Great Turning: From Empire to Earth Community, Korten argues that corporate consolidation of power is merely a contemporary manifestation of what he defines as "Empire"--the organization of society by hierarchies of domination grounded in violent chauvinisms of race, gender, religion, nationality, language, and class. The result has been the same for 5,000 years--fortune for the few and misery for the many. Now, thanks to modern technologies, the way of Empire is increasingly destructive to children, family, community, and nature itself, rapidly leading us all to the brink of worldwide environmental and social collapse.

Korten makes the case that we are a species with the power of choice, and that at this defining moment in history, humanity faces both the opportunity and the imperative to choose our future in a conscious collective manner. A mounting perfect economic storm is fast approaching. A convergence of climate change, the fast approaching peak and decline in oil production, and the financial instability inherent in an unbalanced global trading system will bring an unraveling of the corporate-led global economy and a dramatic restructuring of every aspect of modern life--whether we like it or not.

This unraveling cannot be avoided. We can, however, turn a potentially terminal crisis into an epic opportunity to bring forth a new era of Earth Community grounded in the life-affirming cultural values shared by most all the world's people and eloquently articulated in the Earth Charter.

The Great Turning is an essential resource for those who understand the need for fundamental change. It cuts through the complexity of our time to illuminate a simple, but elegant truth. We humans live by stories. We are held captive to the ways of Empire by a cultural trance of our own creation--indeed, one need look no further than our popular culture and the way it is magnified in TV, movies, and other mass media to see how this paradigm is reflected back upon us all everyday. Changing our future begins with changing our stories in a way that includes our capacities for compassion, cooperation, responsible self-direction, and self-organizing partnership. This is a work already underway, and to succeed, it ultimately will call for the participation of every person on the planet. In The Great Turning, David Korten points the way to the inspiring outcome within our reach.

"Here's the book we've been waiting for. We are not doomed to domination and suicidal competition. We can choose another story. This is the `Great Turning.'"
--Joanna Macy, author of Coming Back to Life

"An epic work. Exposes the myths that divide us and frames the stories that can bring us together."
--Danny Glover, activist and actor

"The Great Turning is a work of amazing scope and depth. This is a wise and much needed book that shows we can create cultures where our enormous human capacities for joy, caring, and cooperation are realized."
--Riane Eisler, author of The Chalice and the Blade

"Employing history, psychology, economics, spirituality, and common sense, Korten not only critiques the dilemma we are in as a species, he also shows us doable and workable ways out of our morass. This book is a kind of Bible to the 21st century, a revelation of where we might travel if we have the moral imagination and the courage to choose and act wisely. Bravo!"
--Matthew Fox, educator and theologian, author of Original Blessing and A New Reformation

"David Korten has produced a masterpiece! Fascinating, compelling, wonderfully readable, and broad reaching in its arc of history and significance, The Great Turning will keep you up nights reading, fill your notebooks with insights, and give you the ammunition to win the water cooler wars."
--Thom Hartmann, Air America Radio talk show host and author of Screwed: The Undeclared War on the Middle Class

"I love this book! David Korten has done it again--created a masterpiece of big thinking to help us find our way in this death-or-life historical moment."
-- Frances Moore Lappé, author of Hope's Edge and Democracy's Edge

"What a gift David Korten has given us with this prophetic book! This is a must-read for activists, for lovers of contemporary American studies, and for Cultural Creatives."
--Paul H. Ray, co-author of The Cultural Creatives

"A must read for everyone who yearns to create a positive human future. The Great Turning is a wise, profound, and practical book filled with fresh insights and is destined to be even more influential than Korten's previous contributions"
-- Anita Roddick, founder of The Body Shop