Items related to Pakistan on the Brink: The Future of America, Pakistan,...

Home Rashid, Ahmed Pakistan on the Brink: The Future of America, Pakistan, and ...
Stock Image 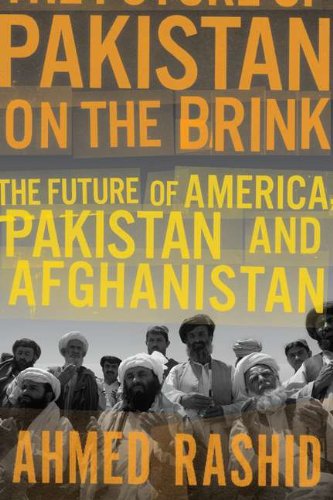 Pakistan on the Brink: The Future of America, Pakistan, and Afghanistan

The book has been read, but is in excellent condition. Pages are intact and not marred by notes or highlighting. The spine remains undamaged. Seller Inventory # CIN000958749

Title: Pakistan on the Brink: The Future of America...

The leading journalist on Pakistan lays out America's options with Pakistan and Afghanistan in the post-Bin Laden years.

What are the possibilities-and hazards-facing America as it withdraws from Afghanistan and as it reviews its long engagement in Pakistan? Where is the Taliban now in both these countries? What does the immediate future hold and what are America's choices as President Obama considers our complicated history and faces reelection?

These are some of the crucial questions that Ahmed Rashid- Pakistan's preeminent journalist-takes on in this follow-up to his acclaimed Descent into Chaos. Rashid correctly predicted that the Iraq war would have to be refocused into Afghanistan and that Pakistan would emerge as the leading player through which American interests and actions would have to be directed. Now, as Washington and the rest of the West wrestle with negotiating with unreliable and unstable "allies" in Pakistan, there is no better guide to the dark future than Ahmed Rashid.

He focuses on the long-term problems-the changing casts of characters, the future of international terrorism, and the actual policies and strategies both within Pakistan and Afghanistan and among the Western allies-as the world tries to bring some stability to a fractured region saddled with a legacy of violence and corruption. The decisions made by America and the West will affect the security and safety of the world. And as he has done so well in the past, Rashid offers sensible solutions and provides a way forward for all three countries.

Ahmed Rashid is a journalist who has been covering Afghanistan, Pakistan, and Central Asia for more than twenty years. He is a correspondent for the Wall Street Journal, Far Eastern Economic Review, Daily Telegraph, and The Nation, a leading newspaper in Pakistan. His #1 New York Times bestseller Taliban has been translated into more than twenty languages.

In 2002, World of Books Group was founded on an ethos to do good, protect the planet and support charities by enabling more goods to be reused. Since then, we've grown into to a global company pioneering the circular economy. Today, we drive the circular economy through three re-commerce brands: - Wob: Through Wob, we sell. We provide affordable, preloved books and media to customers all over the world. A book leaves our collection of over seven million titles and begins a new chapter every two seconds, enabling more goods to be reused. - Ziffit: Through Ziffit, we buy. We give people around the world the opportunity to contribute to the circular economy, earn money and protect the planet, by trading their unwanted books and media. - Shopiago: Through Shopiago, we help others. By sharing the technology that has grown World of Books Group into the business it is today, we?re helping charities increase revenue and reduce waste through re-commerce.


WorldofBooks.com fully embraces the AbeBooks terms and conditions and we will do what we can to resolve any issues.


Orders ship within 2 business days. Shipping costs are based on books weighing 2.2 LB, or 1 KG. If your book order is heavy or oversized, we may contact you to let you know extra shipping is required.
We are only shipping to the US currently. Any order placed from outside the United States will automatically refunded.