Items related to A Collection of the Works of Thomas Chalkley in Two... 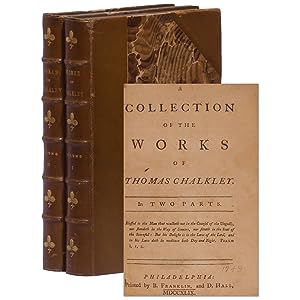 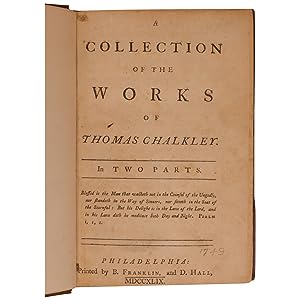 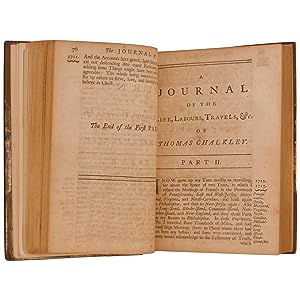 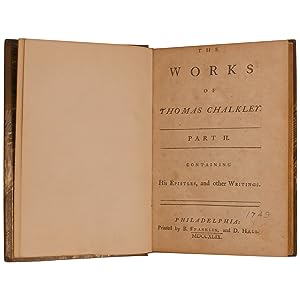 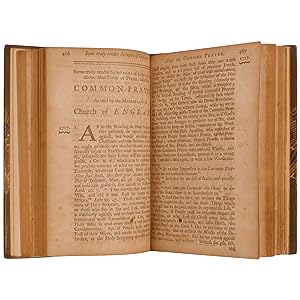 A Collection of the Works of Thomas Chalkley in Two Parts

Published by B. Franklin and D. Hall, Philadelphia, 1749
Condition: Very good Hardcover
Save for Later
From Downtown Brown Books (Portland, OR, U.S.A.)

AbeBooks Seller Since May 3, 2019 Seller Rating

A substantial and important colonial American book printed on the press of one of the country's founding fathers and its first great polymath (inventor, revolutionary, politician, diplomat, raconteur, writer, and entrepreneur), Benjamin Franklin. If Franklin had been nothing more than a printer, with his shop foreman, David Hall, he would have been one of the most important figures of 18th century America. Between 1728 and 1766, Franklin published important American books, as well as newspapers and his still-famous Poor Richard's almanack. In the process, he became one of the country's first rags-to-riches success stories, and one of the wealthiest people in the colonies. This work collects the journals and other writings of Thomas Chalkley, one of the best-known Quaker preachers and an influential leader of that community in the American colonies. The two parts referred to in the title are "A Journal, or, Historical Account of the Life, Travels, and Christian Experience of that Antient, Faithful Servant of Jesus Christ, Thomas Chalkley" and "The Works of Thomas Chalkley. Containing His Epistles, and Other Writings." The book as well as both parts have separate title pages, each with a Franklin and Hall imprint, making three in total. Chalkley was born in England in 1675, he came to America in 1698 and bought land in Philadelphia in 1700. He traveled extensively in the American and Caribbean colonies and died of fever in Tortola, in 1741. His will asked the Quakers of Philadelphia to edit and publish his works, which they did with this book, printed by Franklin and Hall on American-made paper with a fleur-de-lys watermark, in 1749. "Chalkley was probably the most influential quaker minister in America during the eighteenth century. His position seems to have been nearly analogous to that of a modern missionary bishop. The narrow escapes he had are very numerous, and in nearly every instance he insinuates that he was saved by a miracle. His 'Journal,' from its quaint simplicity, is still intensely interesting; its popularity among the Friends is shown by its having been reprinted at least a dozen times in England, the last being in 1842" (Dictionary of National Biography). Benjamin Franklin's apprentice, James Chattin, also reprinted the book in Philadelphia in 1754. Reference: Miller, Benjamin Franklin's Philadelphia Printing, no. 463. xv, 590 pages. First edition, bound in two volumes. Complete, but with leaf A1 bound in at the end of the second volume (instead of at the beginning of the first). The blank leaf at the end of Part I is present. The second volume begins with the title page for Part II. Bound in 20th century three-quarter brown morocco with raised bands and clover emblems stamped in gilt on the spines. An attractive set. Seller Inventory # 308195

Title: A Collection of the Works of Thomas Chalkley...

We offer first editions, unusual, and rare books in Portland, Oregon. We are open to the public by appointment only.


All items guarantee as described. Returns accepted for any reason within 30 days of the estimated delivery date.


Purchases sent to US addresses are usually shipped on the next business day by USPS Media Mail. Priority delivery and International orders may require additional shipping, depending on the size of the item(s) purchased.