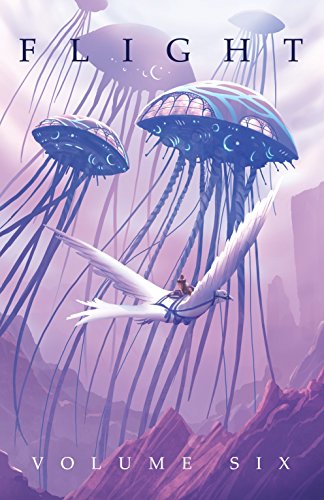 Synopsis: STORIES BY [set in 2 columns]

“Regardless of where it’s shelved, this book belongs in every library.”—Library Journal, on Flight: Volume One

“Sumptuously produced . . . The emphasis on the visual is Flight’s most notable strength.”—Booklist, on Flight: Volume Three

About the Author: Kazu Kibuishi was 24 years old and working full-time in the animation industry when he began developing the idea of doing Flight. He began contacting his friends in the animation, comics, and graphic novel world to see if they would want to join the project. He now works from his home studio in Pasadena, California, creating and promoting Flight and his popular young adult comic Daisy Kutter, which was nominated as an American Library Association Best Book for Young Adults—the only graphic novel on the list in 2005.

Book Description Condition: Fair. Independent family-run bookstore for over 50 years! Buy with confidence! Book is in acceptable condition with wear to the pages, binding, and some marks within. Seller Inventory # bk0345505905xvz189zvxacp

Book Description Condition: Good. A+ Customer service! Satisfaction Guaranteed! Book is in Used-Good condition. Pages and cover are clean and intact. Used items may not include supplementary materials such as CDs or access codes. May show signs of minor shelf wear and contain limited notes and highlighting. Seller Inventory # 0345505905-2-4

There are 5 more copies of this book