Items related to My Own Liberator: A Memoir

Home My Own Liberator: A Memoir
Stock Image 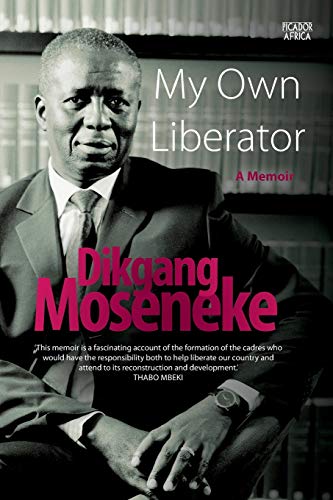 My Own Liberator: A Memoir

Quantity: 20
View all  copies of this book
Buy New
Price: US$ 31.40 Convert Currency
Shipping: US$ 13.28 From United Kingdom to U.S.A. Destination, rates & speeds
Add to basket

Title: My Own Liberator: A Memoir

In My Own Liberator, Dikgang Moseneke pays homage to the many people and places that have helped to define and shape him. In tracing his ancestry, the influence on both his maternal and paternal sides is evident in the values they imbued in their children – the importance of family, the value of hard work and education, an uncompromising moral code, compassion for those less fortunate and unflinching refusal to accept an unjust political regime or acknowledge its oppressive laws.

As a young activist in the Pan-Africanist Congress, at the tender age of fifteen, Moseneke was arrested, detained and, in 1963, sentenced to ten years on Robben Island for participating in anti-apartheid activities. Physical incarceration, harsh conditions and inhumane treatment could not imprison the political prisoners’ minds, however, and for many the Island became a school not only in politics but an opportunity for dedicated study, formal and informal. It set the young Moseneke on a path towards a law degree that would provide the bedrock for a long and fruitful legal career and see him serve his country in the highest court.

My Own Liberator charts Moseneke’ s rise as one of the country’s top legal minds, who not only helped to draft the interim constitution, but for fifteen years acted as a guardian of that constitution for all South Africans, helping to make it a living document for the country and its people.

DIKGANG MOSENEKE was born in Pretoria in December 1947. While imprisoned on Robben Island, he obtained a Bachelor of Arts in English and political science and a B Juris degree, and would later complete a Bachelor of Laws, from the University of South Africa. Moseneke started his professional career as an attorney's clerk in 1976. He was admitted as an attorney in 1978 and practised for five years at Maluleke, Seriti and Moseneke. In 1983 he was called to the Pretoria Bar and he was awarded senior counsel status ten years later. Moseneke worked underground for the PAC during the 1980s and became its deputy president when it was unbanned in 1990. Moseneke also served on the technical committee that drafted the interim constitution of 1993. In 1994 he was appointed deputy chairperson of the Independent Electoral Commission, which conducted the first democratic elections in South Africa. Between 1995 and 2001, Moseneke left the Bar to pursue a full-time corporate career, but in November 2001, he came back to law when he was appointed to the High Court in Pretoria by then President Thabo Mbeki. A year later Moseneke was made a judge in the Constitutional Court and, in June 2005, he became Deputy Chief Justice, a position from which he retired in May 2016. Moseneke is regarded as one of the strongest judges on South Africa's Constitutional Court. For example, he has been praised for his 'towering legal mind' and 'commitment to fairness and justice' and described as 'a most independent-minded and imaginative jurist'. He retired in May 2016 from his position as Deputy Chief Justice.