Items related to Notes from Exile: On Being Acadian 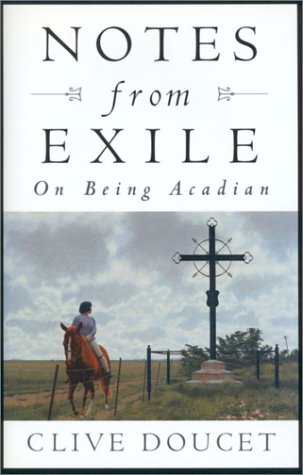 Notes from Exile: On Being Acadian

Title: Notes from Exile: On Being Acadian

What it means to be a people without a nation is one of the more haunting problems of our times. In the twentieth century, this has been an immense issue for Jews, for the Romanies, and for African-Americans; it has been a question for Acadians for more than 350 years.

In 1755, in retribution for their refusal to bear arms, all Acadians were deported from their homeland around the Bay of Fundy in what is today Canada’s Maritime region. Ever since, they have worked hard to keep a sense of their identity as Acadians, no matter whether they lived in New Brunswick or Louisiana, Nova Scotia or Texas.

Clive Doucet has wrestled with the question of Acadian identity since his childhood, when he spent some unforgettable summers with his paternal grandparents in an Acadian village in Nova Scotia and others with his maternal grandparents in London, England. In 1994, he joined with a quarter of a million other Acadians in their first ever reunion as a people, in New Brunswick, Canada. It inspired him to write Notes from Exile, which is in part a charming story of his childhood holidays, a heartwarming account of “les Retrouvailles,” and an eye-opening history of the Acadians, woven into a whole by a thoughtful, challenging consideration of what it means to be Acadian in a world without Acadie.

“This is imperative reading for anyone whose knowledge of the Acadians comes exclusively from droningly one-sided history lessons and ‘Evangeline.’...Doucet brings Acadie into the living, breathing present.”
–Lynn Coady, Globe and Mail

“Doucet presents readers with a memorable portrait, a richly woven tapestry of history, tradition, and the ties of community connections.”
–Ottawa Citizen