Items related to The Downhill Lie: A Hacker's Return to a Ruinous... 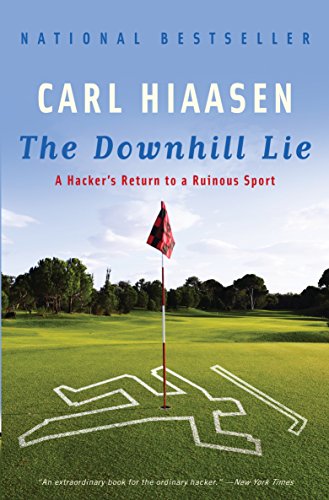 The Downhill Lie: A Hacker's Return to a Ruinous Sport

Quantity: 1
View all  copies of this book
Buy Used
Price: US$ 4.25 Convert Currency
Shipping: US$ 4.25 Within U.S.A. Destination, rates & speeds
Add to basket

Title: The Downhill Lie: A Hacker's Return to a ...

Filled with harrowing divots, deadly doglegs, and excruciating sandtraps, The Downhill Lie is a hilarious chronicle of mis-adventure that will have you rolling with laughter.

Bestselling author Carl Hiaasen wisely quit golfing in 1973. But some ambitions refuse to die, and as the years passed and the memories of slices and hooks faded, it dawned on Carl that there might be one thing in life he could do better in middle age than he could as a youth. So gradually he ventured back to the rolling, frustrating green hills of the golf course, where he ultimately—and foolishly—agreed to compete in a country-club tournament against players who can actually hit the ball.

CARL HIAASEN was born and raised in Florida. He is the author of numerous novels, including the best sellers Razor Girl, Bad Monkey, Star Island, Nature Girl, Skinny Dip, Sick Puppy, and Lucky You, and five best-selling children’s books, Hoot, Flush, Scat, Chomp, and Skink. His most recent work of nonfiction is Dance of the Reptiles, a collection of his columns from The Miami Herald.