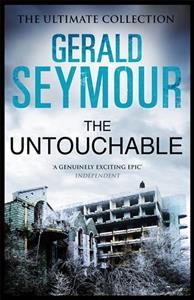 Synopsis: "The finest thriller writer in the world today." SUNDAY TELEGRAPH In London, Albert William Pacher, known as Mister, is master of all he surveys. His core business is heroine, bought in from the Turks in Green Lanes and distributed around the capital. After yet another police case against him collapses, he decides to travel to Sarajevo to expand his empire further - but he is followed by Home Office archivist Joey Cann, who is determined to find a way to bring Packer to justice. In the war-torn and dismal surroundings of Sarajevo, where law and order are administered by gangster warlords, Packer attempts to gain a foothold in new territory. Meanwhile, Joey chips away, uncovering more every day, until he has sufficient momentum to confront him driectly...

From the Inside Flap: Albert William Packer is the supreme baron of London crime. He rules his manor with a cruel, ruthless fist. To those around him, on whatever side of the law, he is the Untouchable.

When another criminal case against him collapses, Packer turns his attention to expanding his heroin empire abroad. Where better to cut out the middle man than at the historic smuggling crossroads of Europe, the Balkans? New men and women are drafted into Customs & Excise unit dedicated to convicting Packer. Only one from the old team survives: the most junior, Joey Cann, retained solely for his obsessional knowledge of the man who calls himself 'Mister'. When Packer leaves for Sarajevo, it is inevitable that Cann be sent after him for 'intrusive surveillance'. The brief: to bring back the evidence that will finally nail Packer to the wall, whatever it takes. In London, it would have been no contest. But here on the war-torn streets of a city where justice is enforced by gangster warlords, Packer is far from home and from what he knows. Here, who will be the Untouchable, who will walk away?

Book Description Paperback. Condition: Good. Ex library copy with usual stamps & stickers . Pulling to the binding has cause the pages of the book to become slightly loose along the inside of the spine Good condition is defined as: a copy that has been read but remains in clean condition. All of the pages are intact and the cover is intact and the spine may show signs of wear. The book may have minor markings which are not specifically mentioned. Most items will be dispatched the same or the next working day. Seller Inventory # wbb0020825922

Book Description Condition: Good. Ships from the UK. Former library book; may include library markings. Used book that is in clean, average condition without any missing pages. Seller Inventory # GRP82746286

Book Description Paperback. Condition: Very Good. The book has been read, but is in excellent condition. Pages are intact and not marred by notes or highlighting. The spine remains undamaged. Seller Inventory # GOR007113028

Book Description Paperback. Condition: New. Language: English. Brand new Book. Albert Packer is the supreme baron of London crime, ruling his domain with a ruthless fist and thinking of himself as the Untouchable. As yet another criminal case against him collapses, Packer turns his attention to expanding his heroin empire abroad, deciding to travel to Sarajevo himself in order to cut out the middle man. But the Customs & Excise unit tasked with taking him down are determined not to give up. Packer may be king on his home turf, but on the war-torn streets of a city where justice is enforced by gangster warlords, he might just make a mistake. And Joey Cann, obsessed with bringing Packer to justice, will be there when he does. Seller Inventory # HUK9781444760392

There are 4 more copies of this book