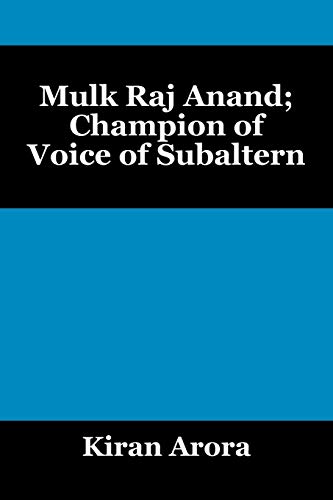 Quantity: 20
View all  copies of this book
Buy New
Price: US$ 75.42 Convert Currency
Shipping: US$ 13.41 From United Kingdom to U.S.A. Destination, rates & speeds
Add to basket

Mulk Raj Anand - His Progressive Proletarianis... Mulk Raj Anand is passionately concerned with the villages, with the ferocious poverty and cruelties of caste with orphans, with untouchables and urban labourers. Thus the life and the humiliating conditions, under which lay crushed these low down-trodden victims of the inexorable social, economic and political order that existed in Indian Villages, was the subject Mulk Raj chose for himself. He felt that it was his duty and the mission of his life to focus the attention of his readers, on the innumerable wrongs, injustices and the injuries that were being continuously perpetrated on these young unfortunate underdogs of Indian society. He laid the scene of action of his novels, by and large, in the villages and cities of the Punjab with which he was well familiar. He could easily delineate with realistic details the topography, the style and the language of their talk, the customs, superstitions, religious practices, and their disabilities - social, economic and political from which the people of his novels suffered.

Born and brought up in the holy city of Amritsar Dr. Kiran Arora graduated from Government College Amritsar and did her M.A M. Phil (English) from Guru Nanak Dev University campus and doctorate from Lucknow University. Apart from this she completed her PGCTE (Post Graduate Certificate Course in the Teaching of English) from Central Institute of English & Foreign Languages, Hyderabad, DCE (Diploma in Creative Writing in English) from Indira Gandhi National Open University, Delhi and PGDJ (Post-Graduate Diploma in Journalism) from Cochin University. All these courses she did in her attempt to improve and update her English teaching while teaching English in a Post-Graduate College Dr. Arora is the first Principal from Punjab having completed International Diploma in Educational Leadership-Higher Education. She has been a member of a number of academic bodies. She has published about 20 research papers/articles in reputed Journals. She has started a number of courses in the present college headed by her and also the college has been accredited with grade 'A' by NAAC. Her name was sponsored by the UGC to visit Hungary under International Educational Exchange Programme. Dr. Arora is actively involved with academic bodies of GNDU and also an expert member of autonomous colleges. In the recent years, she has been working towards making higher education more employable, job oriented particularly at graduate level, as such skill and career oriented course have been introduced thereby job prospects have been enhanced by UG and Post Graduate students of her college. In a nutshell, she is intelligent, committed and dedicated teacher-cum-mangaer totally devoted to expansion and development of higher education in India.