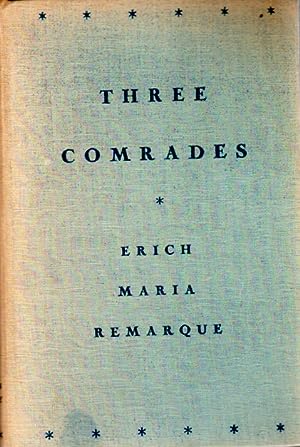 We're sorry; this specific copy is no longer available. Here are our closest matches for THREE COMRADES.

Book Description Hardcover. Condition: Good. Much of the magic surrounding his legendary name had vanished by the time F. Scott Fitzgerald%u2014forty-one years old, deeply in debt, full of re­morse that %u201CI had been only a mediocre caretaker of most things left in my hands, even of my talent%u201D%u2014mounted a third assault on the money of Hol­lywood and, by writing this adaptation of Remarque%u2019s Three Comrades, proved that the writer, if not the man, had sur­vived the famed %u201Ccrack-up.%u201D The screenplay for Three Comrades, starring Robert Young, Margaret Sulla­van, Franchot Tone, and Robert Taylor, ultimately was the result of the collaboration of E. E. Paramore and producer Joseph Mankiewicz, though Fitzgerald fought to salvage as much of his original script as possible. By his own reckoning, only about a third of the final script was his, and %u201Call shad­ows and rhythm removed.%u201D The script published here is the one Fitzgerald tried desperately to save. Neither Mankiewicz nor Paramore has written a line. This script is, of course, valuable to those who would know the complete Fitzgerald. It also proves fas­cinating as a study of adaptation, show­ing which scenes Fitzgerald chose to dramatize to catch the essence of the Remarque story as well as showing how he made visual what the novelist could place in the heads of his readers. Series editor Matthew J. Bruccoli provides the background in an il­luminating Afterword and in an appen­dix containing eight scenes that re­sulted from the collaboration of Man­kiewicz, Paramore, and Fitzgerald. Missing dust jacket. Moderate shelf wear. Noticable fading due to exposure to sunlight. Book. Seller Inventory # 123607437

Book Description Paperback. Condition: Good. Connecting readers with great books since 1972. Used books may not include companion materials, some shelf wear, may contain highlighting/notes, may not include cdrom or access codes. Customer service is our top priority!. Seller Inventory # S_294996943

Book Description Hardcover. Condition: Good. book dated by certificate on first blank page. see photos for condition of covers and spine no other marks in this old book. dispatch from our warehouse with in 48 hours. Seller Inventory # ab404GB H28

Book Description Mass Market Paperback. Condition: Collectible-Acceptable. Popular Library.Same press from listing.1958.(SP14). Good solid paperback with moderate reading/age wear, may have some light markings, pages may have some mild tanning. We take great pride in accurately describing the condition of our books and media, ship within 48 hours, and offer a 100% money back guarantee. Customers purchasing more than one item from us may be entitled to a shipping discount. Seller Inventory # 1M5000006OR7_ns

There are 440 more copies of this book