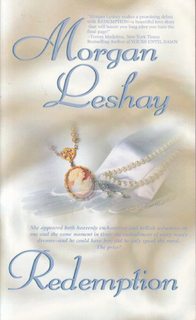 Quantity: 1
View all  copies of this book
Buy Used
Price: US$ 15.96 Convert Currency
Shipping: US$ 4.95 Within U.S.A. Destination, rates & speeds
Add to basket

SHE WAS HEAVEN SENT... Lady Tian Winterbourne has spent the last five years in seclusion, roaming the secret chambers and corridors within Valholen Monastery. She was content with her ghostly plight until fate dropped the devil on her doorstep tempting her to sin... HE WAS SIN INCARNATE... Devlin Montaign, Viscount Syndale, who is better known as "Lord Syn", has a reputation for being a rogue and a scoundrel. He is touted a seducer of innocents, a rakehell, and he was content to live up to his scandalous reputation until an angel put her faith in him and made him yearn for redemption...

Morgan Leshay is a romantic. An avid reader of romance fiction since the tender age of nine, Morgan eventually came to think that she “could write one of those books in her sleep—with her hands tied”. Right off the bat, she discovered there was a little something else she needed to do first—learn the craft.For several years, she read everything she could get her hands on in regards to writing romance. She subscribed to writers magazines, took course after course on writing, and then...she discovered the Internet...and chat rooms...where people talked about...writing romance! From that point on, Morgan rubbed cyber-elbows with the creme-de-la-creme of romance fiction writers online, such as Julia Quinn (when she was still “Julie Q”), Tina St. John, Gaelen Foley, and Sherrilyn Kenyon.In 1997, Morgan thought that, at last, she was ready. She entered her then latest “work-in-progress” in a writing contest. First chapters were being judged. She won third place, and received lots of fabulous comments on her work, but out of all the scores and comments she received, Morgan is proudest of the 99 out of 100 points given to her by the one and only Sherrilyn Kenyon of today’s “Dark-Hunter” fame. Psyched by the praise from one of today’s top romance authors, Morgan then began the eternal cycle: submit, get rejected, submit...you get the idea. It wasn’t until 2004 that Morgan finally got the “break” she’d been waiting for. Jacqueline Druga Marchetti at LBF Books asked for her manuscript, and...the rest is history.When not otherwise engaged in generating new and exciting romance novel concepts she spends her time enjoying the sunrise and sunset with her husband. She loves to hear from readers. You can email her at morgan@morganleshay.com www.morganleshay.com

At Never Too Many Books we strive to provide the best in customer service. From obtaining the widest variety of books we can find, to grading each book by hand and providing the most accurate description possible. You will never see the words MAY HAVE in one of our listings. All inquiries are answered within 24 hours with very few exceptions. We ship 6 days a week unless there is a National holiday. 95% of our orders are shipped within 24 hours. We offer a 100% money back guarantee (minus a portion of the shipping charge) if our product does not meet with your expectations. Member ABA (AMerican Booksellers Association)


Orders usually ship within 2 business days. Shipping costs are based on books weighing 2.2 LB, or 1 KG. If your book order is heavy or oversized, we may contact you to let you know extra shipping is required. Free Delivery confirmation with every order.