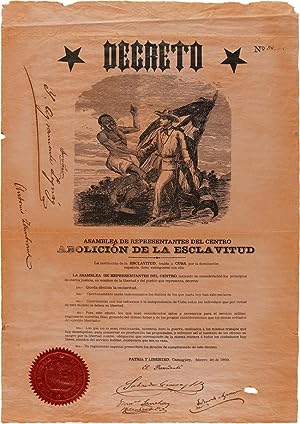 Pictorial letterpress broadside, 18 1/2 x 13 inches. Numbered "54" in manuscript, bearing the embossed red seal of the Republica Cubana, and signed in ink by Salvador Cisneros y Betancourt, Eduardo Agramonte, Ignacio Agramonte Loyn áz, Francisco Sánchez y Betancourt and Antonio Zambrana. Old horizontal folds, minor creasing, handful of small edge chips. Small hole in bottom margin just touching one ink signature. Very good condition. A rare and significant pictorial Cuban decree from the provisional rebel government abolishing slavery on the part of the island they controlled, issued by the radical faction of the Cuban nationalists fighting against Spanish rule in the first months of the Ten Years' War. This proclamation is illustrated with a dramatic woodcut signed "LFR" depicting an ill-clad but exultant freed slave and a rebel celebrating in front of the Cuban flag. This decree stipulated freedom for all the enslaved people of Cuba, in hopes that they would join the revolutionary struggle. The decree also provided for eventual compensation to slaveholders, and ordered that freed individuals must serve the revolution either through military service or by continuing with their previous work. Among the important leaders who signed the present document were Salvador Cisneros y Betancourt (as president, just below the printed text) and Ignacio Agramonte y Loynáz (as secretary, to the left of the engraving). The practical effect of this decree was modest, as the rebels only controlled limited territory before their ultimate defeat, and their territory was generally under the control of more conservative military commanders, but such a proclamation joined a growing chorus of abolitionist sentiment in Cuba, which finally realized the end of slavery in 1886. A powerful statement of anti-slavery policy in mid-19th-century Cuba, with a striking illustration of a jubilant slave celebrating his short-lived freedom. Rare, with no copies recorded in OCLC. Seller Inventory # WRCAM56566