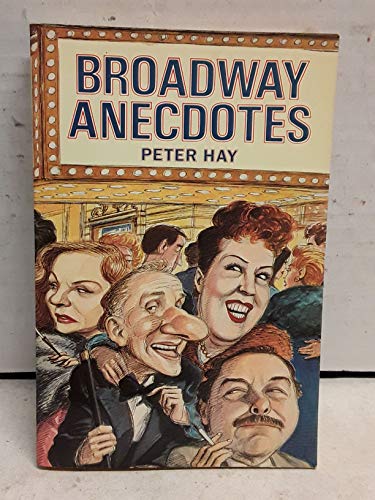 Quantity: 1
View all  copies of this book
Buy New
Price: US$ 72.30 Convert Currency
Shipping: US$ 5.55 Within U.S.A. Destination, rates & speeds
Add to basket

Peter Hay's marvelously entertaining collection of stories leads us down that sparkling thoroughfare known as the Great White Way. Called the Street of the Midnight Sun by Diamond Jim Brady and immortalized by Walter Winchell and Damon Runyon as the Hardened Artery or Main Stem, Broadway embodies the entire history of live entertainment in America, and Broadway Anecdotes captures it in all its diversity.
Expertly guided by Peter Hay, we will discover everything that Broadway is known for: the "legitimate" theatre, its stars and famous shows, the musicals, producers, hangouts, nightclubs, columnists, agents, vaudeville, burlesque, off-Broadway, and the road. From the first stage performances in America in the 1660s to the tragic decline of Edwin Booth's acting career, and from the controversy surrounding nude dancing in Oh Calcutta! to the dry wit of Tallulah Bankhead's comment to Tennessee Williams on the film version of Orpheus Descending ("Darling, they've absolutely ruined your perfectly dreadful play"), Broadway Anecdotes throws a unique, theatrical spotlight on American history. Along the way, we encounter countless movie stars, including Marilyn Monroe as she manages to remain anonymous on New York City streets simply by changing her walk, and Mae West as she whiles away her time in jail on an obscenity conviction, and even the young Henry Fonda as he balks at the suggestion of Marlon Brando's mother that he give acting a try, exclaiming "Good God, I don't know how to act." We also meet other kinds of celebrities, such as Alfred Bloomingdale, scion of the department store family, who briefly tried his hand at producing, and after a performance of the musical Allah be Praised! was told by his friend Cy Howard to "close the show and keep the stores open nights."
Anyone who has ever been touched by the magic of Broadway will treasure this delightful collection of verbal snapshots of its vibrant world.

About the Author:
Peter Hay has taught drama at several universities and is founding artistic director and dramaturge at First Stage, a non-profit theatre group in Los Angeles. He is the author of Ordinary Heroes and several anecdote books.