Items related to Folk Art of the Soviet Union: Reflections of a Rich... 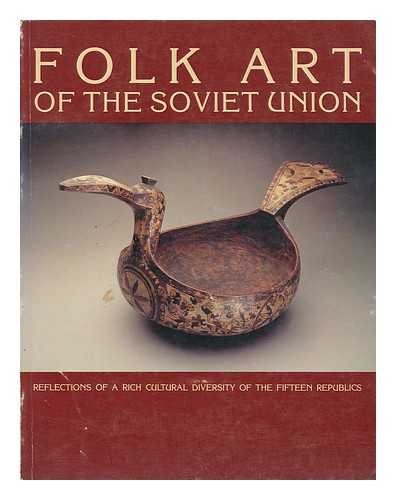 Folk Art of the Soviet Union: Reflections of a Rich Cultural Diversity of the 15 Republics

Quantity: 1
View all  copies of this book
Buy Used
Price: US$ 8.00 Convert Currency
Shipping: US$ 4.25 Within U.S.A. Destination, rates & speeds
Add to basket

Cover has rubs, bumped/curled corners, surface scratches/dents/fogging, scrapes along edges and scuffs. A few dot stains on bottom edges otherwise pages are clean and binding is tight. Inside is VG but outside puts this at Good. 11" tall, 167 pages. Seller Inventory # 9955935

Title: Folk Art of the Soviet Union: Reflections of...

1989. 168 pages, 100+ color photograpahs, one map, seven regional commentaries by curators and researchers of the State Museum of Ethnography of the Peoples of the USSR, Leningrad.

This book is from an exhibition of the same name organized and presented by Mingei International in conjunction with the Soviet Art Festival, City of San Diego. This exhibition had Soviet curators and was held at the B Street Pier Cruise Ship Terminal as part of the Museum's outreach program. Following its presentation at Mingei International Museum, this exhibition traveled to the San Francisco Craft and Folk Art Museum.

The exhibition provided the first opportunity outside the Soviet Union to view over 700 folk art objects from the 18th to 20th centuries, on loan from the State Museum of Ethnography, Leningrad. These objects used in daily living, included: rugs from Central Asia; Ukrainian glass and ceramics, weavings; textiles; furniture; clothing; jewelry, etc.

Here is a unique first opportunity outside of the Soviet Union to see an overview of historical and contemporary art of the people living within the vast and varied geographical areas of the Soviet. Union.

This nation covers approximately one sixth of our world's land surface, stretches from the Arctic North to the deserts of Central Asia and extends almost 7,000 miles from the European borders in the west to China and the Pacific Ocean in the east. Within this vast territory are more than one hundred different ethnic groups, each with its own language, customs, and unique cultural traditions embodied in a wide variety of art forms.

The selections were made by MINGEI INTERNATIONAL MUSEUM from the collections of one of the Soviet Union's largest museums, The State Museum of Ethnography of the Peoples of the U.S.S.R. in Leningrad.

Each object has been chosen for its aesthetic quality, craftsmanship, and regional character. All are indigenous art made by and for the people, in contrast to objects commercially produced for tourist consumption. Of unsurpassed beauty, they are used in daily life and reflect continuing changes in living traditions.

Book'em is a used bookstore in Port Orchard, Washington. We carry fiction, non-fiction, hard cover, paper backs, classics, out of print pocketbooks, and a large selection of children's books. We have over 75,000 + books in stock


We accept money orders, checks, Paypal and Visa or Mastercard. Please call 360 874-0841 or order by mail if using your credit card. Books will be held for 14 days upon receipt of request. A book will be shipped upon receipt of payment. Shipping charges are $4.00 for the first book and $2.00 for each additional book (if shipped within the U.S.) Books are returnable for a full refund within 10 business days if they are not in the condition as described. Overseas shipping is $10.00 air mail and mor...