Items related to OPEN WIDE: HOW HOLLYWOOD BOX OFF 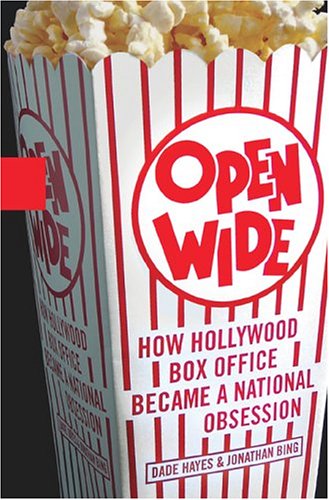 OPEN WIDE: HOW HOLLYWOOD BOX OFF

Quantity: 1
View all  copies of this book
Buy New
Price: US$ 68.23 Convert Currency
Shipping: US$ 5.45 Within U.S.A. Destination, rates & speeds
Add to basket

Every weekend, some of the most powerful players in Hollywood hold their breath and wait to be told a number. Years of work, tens of millions of dollars, and entire careers will be judged against this number. Within hours, it will be reported on the morning news and become a topic of idle conversation across the country. The number determines a movie's ultimate destiny, It is the art and science of filmmaking distilled to a few digits and a dollar sign. It is the opening weekend box office gross.

On July 4, 2003, three highly touted studio soldiers were sent to battle for the hearts and souls (and wallets) of American moviegoers. That was the weekend that Arnold Schwarzenegger's Terminator 3 collided Reese Witherspoon's Legally Blonde 2 and Brad Pitt's Sinbad in thousands of theaters across America. In Open Wide, veteran Hollywood journalists Dade Hayes and Jonathan Bing brilliantly illuminate this quest for box office supremacy. chronicling the nerve-wracking months leading to that summer showdown, following every key decision that took these movies into the nation's multiplexes. They watch as focus groups of suburban teenage girls critique movie trailers and advertising campaigns. They are in Cannes when Terminator 2 robots are unleashed and in London for Legally Blonde 2's lavish, chaotic press junket. A mammoth convention in Las Vegas finds celebrities and studio executives mingling awkwardly with small-town theater owners and vendors hawking high-concept snacks for adventurous concession stands. The films are screened, tested, and frantically re-cut. Publicity stunts are engineered and theater exhibition chains are booked. Star egos are stroked and the Terminator himself announces his campaign for the California statehouse. As the clock ticks down to July 4, opening weekend becomes a moment of eager expectation for some and utter dread for others. And, inevitably, the numbers arrive.

Open Wide shines a bright light on the secretive inner workings of Hollywood's vast sales and marketing machine, past and present. As the authors explore how and why box office receipts have evolved from a closely guarded corporate secret to a national obsession, they bring acute insight to an industry that is increasingly devoted to producing the next big blockbusterthe next high-concept, future-franchise picture that they can "open wide."