Items related to ACTING AS A BUSINESS: STRATEGIES 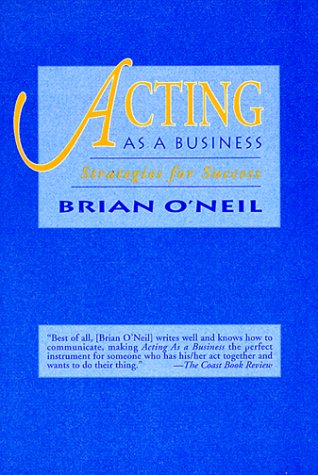 ACTING AS A BUSINESS: STRATEGIES

Quantity: 1
View all  copies of this book
Buy New
Price: US$ 59.41 Convert Currency
Shipping: US$ 5.45 Within U.S.A. Destination, rates & speeds
Add to basket

Title: ACTING AS A BUSINESS: STRATEGIES

Since its original publication, Acting as a Business has earned a reputation as an indispensable tool for working and aspiring actors. Avoiding the usual advice about persistence and luck, Brian Oâ€™Neil provides clear-cut guidelines that will give actors a solid knowledge of the business behind their art. Itâ€™s packed with practical informationâ€“on everything from what to say in a cover letter to where to stand when performing in agentâ€™s officeâ€“including:

â€˘How to craft a winning theatrical rĂ©sumĂ©
â€˘The most effective ways to join the performerâ€™s unions
â€˘Tactics for getting an agent
â€˘Strategies for finding work in the theater, on daytime television, and in independent films
â€˘Navigating the different customs and cultures of New York and Los Angeles

Oâ€™Neil has updated Acting as a Business to keep up with the latest show-business trends, including how best to use the Internet, making this new edition no actor should be without.

Brian O'Neil is a former talent agent and personal manager who has represented actors for theater, film, television, commercials and radio. As a talent representative, he was responsible for the career guidance and professional placement for hudreds of actors. Brian is the founder of Acting as a Business, a one-on-one career-consultation and career-coaching service for actors. He lives in New York City and is a frequent guest-lecturer at some of the nation's finest acting-training programs including The Yale School of Drama and The Juilliard School.