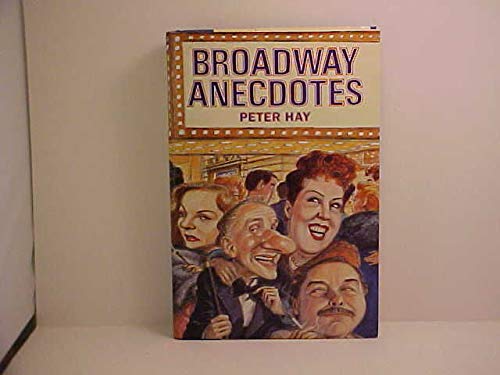 Quantity: 1
View all  copies of this book
Buy New
Price: US$ 59.42 Convert Currency
Shipping: US$ 5.55 Within U.S.A. Destination, rates & speeds
Add to basket

In this marvellously entertaining collection of stories, Peter Hay takes us along that sparkling thoroughfare known as the Great White Way. Called the Street of the Midnight Sun by "Diamond Jim" Brady and immortalized by Walter Winchell and Damon Runyon as the Hardened Artery or Main Stem--Broadway is the embodiment of the history of live entertainment in America, and Peter Hay has captured it in all its dazzling diversity.
Everything that Broadway is known for is here: the "legitimate" theatre, its stars and famous shows, the musicals, producers, hangouts, nightclubs, columnists, agents, vaudeville and burlesque, off-Broadway and the road. From the first time Americans took to the stage in the colonies in the 1660s to the tragic decline of the acting career of Edwin Booth (brother of John Wilkes), and from the trouble with nude dancing in Oh Calcutta! to the dry wit of Tallulah Bankhead's comment to Tennessee Williams on the film version of Orpheus Descending ("Darling, they've absolutely ruined your perfectly dreadful play"), Broadway Anecdotes throws a unique, theatrical spotlight on American history. We learn how Marilyn Monroe managed to remain anonymous on New York City streets simply by changing her walk, how Mae West whiled away her time in jail on an obscenity conviction, and that even the incomparable Katharine Hepburn suffered setbacks early in her career (Dorothy Parker wrote of one of her performances: "Miss Hepburn played the gamut from A to B.")
A delightful collection of verbal snapshots of this vibrant world, Broadway Anecdotes is packed with the legends and lore, the humor and philosophy of a place where understudies still stand by with dreams of overnight stardom, shows still close before they open, and people keep singing in the rain. Anyone who has ever been touched by the magic of Broadway will treasure it.

About the author:
Peter Hay has taught drama at several universities and is the author of a number of books such as Ordinary Heroes and several anecdote books including Theatrical Anecdotes. He is founding artistic director and dramaturge at First Stage, a non-profit theatre group in Los Angeles.