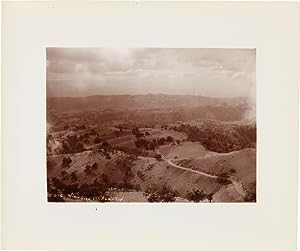 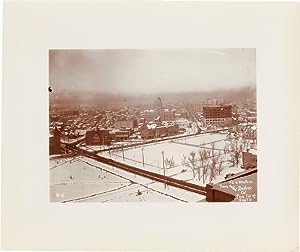 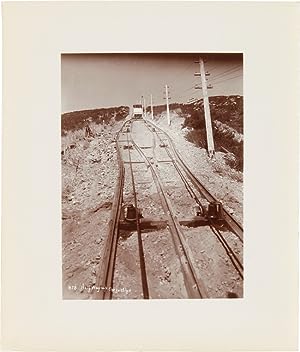 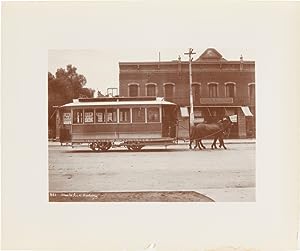 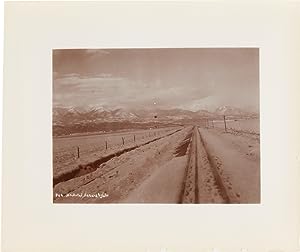 Seventy-nine printing out paper photographic prints, each image 6 x 8 inches on 9 1/2 x 11 1/4- inch medium weight sheets, all but two captioned in the negative. Minor surface wear to a handful of prints, several with minor emulsion chipping to edges, some curling to prints. Overall very good or better condition. An extraordinary collection of large, handsomely-produced photographic prints documenting the exploits of a group of travelers who set out by train through Oregon, California, and Colorado in 1897. The photographs, which are skillfully composed and indicative of an experienced photographer, picture a wide variety of both urban and rural settings along the Pacific Coast and in Colorado, showing a mixture of horse-drawn and cable and street cars but nary an automobile, and constitute a unique and evocative time capsule for numerous locations in the American West in the final few years of the 19th century. The first image features a large group of women and children posed outside a railroad car, with the image captioned "The R&W 97 Transcontinental Party." In fact, two of the images reference the party as "R&W" which likely refers to the company or family who participated in the railway excursion. The travelers were apparently well-to-do by their dress and by the variety of notable high-end hotels they visited. The selection of photographs here was likely hand-picked by one of the members of the excursion after the journey was completed. The preponderance of the images document locations in California. These include two different views of Mount Shasta, scenes in Yosemite Park, sites in Santa Cruz, and several images each in and around San Francisco, Santa Cruz, and Los Angeles. The Yosemite Park pictures show members of the group taking a horse-drawn carriage through a redwood tree, and other Yosemite landmarks are captioned "Yosemite from Inspiration Point," "Bridal Veil Falls," "Two Brothers of the Yosemite," "Trail to Glacier Pt.," "A fallen Monarch of the Yosemite" (the famous downed redwood tree), and "Wawona Point." The San Francisco images include Stanford University (two images), a view of Stanford's Tomb in Menlo Park, the driveway to the Crocker residence, a striking image of downtown focused on the Spreckels Building, the San Francisco City Hall building, the "Court[yard] of the Palace Hotel," Golden Gate Park, a spectacular view across the ocean from Golden Gate Park, the entrance to Sutro Park, and the esplanade in Sutro Park. Images in Santa Cruz depict the residence of Major Frank McLaughlin (known as the Golden Gate Villa), an elevated view of the beach at Santa Cruz, a scene of several travelers in a horse-drawn carriage captioned "Our four in hand on the cliff drive, Santa Cruz, Cal.," and three striking views of the cliffs including two featuring the "Natural Bridge" Cliff at Santa Cruz. The Los Angeles area is well represented in the photographs, which picture the downtown courthouse, a downtown street scene showing the Van Nuys Hotel the year it opened, a view down Spring Street, West Lake Park, East Side Park (four images, including the entrance), an orange grove in Riverside (picturing one of the travelers), Magnolia Avenue in Riverside, an "Orange grower's home" in Riverside, a pair of horses pulling a streetcar labeled "Riverside & Arlington Ry." (before the line was electrified in 1899), and an interesting street scene in downtown Riverside. Other sites in California comprise the Hotel Coronado (four pictures, including an unusual view of the "Drive to the Entrance" of the hotel), Coronado Beach (two views), the "Ruins of Capistrano" (the remnants of the mission church), the train depot at Fresno, a residence in San Jose, the "View from Mt. Hamilton" near San Jose, and the road to the hedge maze at the Hotel Del Monte in Monterey. The Colorado pictures include a breathtaking elevated view of a snowy Denver taken from the top of the capitol building. Other Colorado scenes include a view of New Castle from the train, Glenwood Springs, an image of horse-drawn carriages crossing a bridge over the river in Glenwood Springs, and two images capturing the incline tram up the Royal Gorge near Canon City. The collection also includes a handful of images in Portland, Oregon. These feature the Portland wharf, three separate shots of the Portland Hotel, the "Residence of Dr. McKenzie," and a horse- drawn carriage ride on City Park Drive. Eight of the more intriguing images in the collection were taken while aboard the traveling party's moving railroad car, and picture the vast landscape of the American West in California, Colorado, and Nevada. The captions for these read "From Top of Mountain near Scisco," "We pass through Eagle Cańon," "Leaving Leadvill [sic] behind us," "Some Colorado Scenery," "On the Rio Grande Western," and "Princeton, Harvard, & Yale" (a distant view of the three mountains named for those Ivy League schools in the "Collegiate Peaks" region of the Rocky Mountains). One image, likely in Colorado but with location unidentified is captioned, "Mountains rising thousands of feet all around." There are even a couple of images taken from the train while passing briefly through Nevada, including one of the "Humboldt Desert." In addition to the aforementioned image picturing the women and children of the "R&W 97 Transcontinental Party," there are a handful of images focused on other various members. One is captioned "The R&W 97 Philharmonic Symposium," and features six men standing on a railroad handcar with musical instruments. The words and music to "Sweet Rosy O'Grady" have been written into the photographic negative at center, along with a humorous musical quatrain at right referencing one of the traveling party. This latter bit reads, "The Director General Russ Couldn't play with us, with us, He was not allowed to toot So he kept time with His Boot." Additional pictures of the group feature them dining inside an unnamed restaurant, posed in front of a. Seller Inventory # WRCAM56506