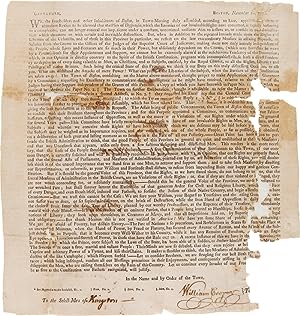 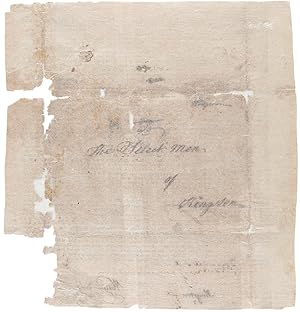 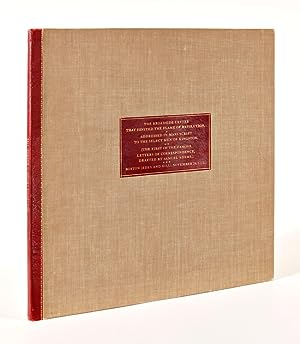 BOSTON, NOVEMBER 20, 1772. GENTLEMEN, WE, THE FREEHOLDERS AND OTHER INHABITANTS OF BOSTON.APPREHENDING THERE IS ABUNDANT REASON TO BE ALARMED THAT THE PLAN OF DESPOTISM, WHICH THE ENEMIES OF OUR INVALUABLE RIGHTS HAVE CONCERTED, IS RAPIDLY HASTENING TO A COMPLETION, CAN NO LONGER CONCEAL OUR IMPATIENCE UNDER A CONSTANT, UNREMITTED, UNIFORM AIM TO INSLAVE US.[beginning of text]

Broadside, 13 x 12 inches. Signed in manuscript "William Cooper" and addressed in ink to the Select-Men of "Kingston" below the text. Ink notation on verso reading "To the Select Men of Kingston." A few areas of paper loss, most significantly to the right side of the document, affecting all or part of some eighty-seven words. Some portions expertly backed with archival tissue to stabilize losses. Minor toning, some bleed through from ink notation on verso. In a half morocco and cloth folding case, leather label. An astonishing survival from the early years of the American Revolutionary movement, this is the circular letter issued by Boston's Committee of Correspondence, which had formed less than three weeks earlier at the behest of Samuel Adams. The Committee called for close coordination between the colonies, and as such, this broadside circular letter can be considered one of the earliest attempts to unite colonial protest against the British Crown. The call prompted other colonies to create their own Committees of Correspondence and helped galvanize resistance to imperial authority. Printed evidence of the activities of the Committees of Correspondence - especially at such an early moment and with content of such high import - are extraordinarily rare in the market. As tensions between the British Crown and its American colonies were growing in the early 1770s, the need for unity and concerted action among the rebellious Americans was becoming ever more apparent. At a town meeting in Boston on November 2, 1772 a standing "Committee of Correspondence" was formed to encourage and facilitate collective resistance, and to assert the rights of American colonists. This text, dated November 20, is a reaction to British attempts to provide salaries to judges in Massachusetts, thereby making them entirely dependent on the Crown for their appointment and continued support. The Committee decries such a strategy, stating that "we cannot but be extremely alarm'd at the mischievous Tendency of this Innovation; which, in our Opinion is directly contrary to the Spirit of the British Constitution, pregnant with innumerable Evils, & hath a direct Tendency to deprive us of every thing valuable as Men, as Christians, and as Subjects, entitled, by the Royal Charter, to all the Right, Liberties and Privileges of native Britons." "Drafted by Samuel Adams, this letter is addressed to the several towns of the Province and urges a united front against British maladministration. This effort of Adams to arouse the populace against British tyranny constituted, according to historians, probably his greatest contribution to the Revolution. Declaring that 'We are not afraid of Poverty, but disdain Slavery,' the incendiary Adams reminded the colonists of their forefathers' ardor for civil and religious liberty, and warned of the dire results to be expected if the measures of the British court are allowed to pass unchecked" - Rosenbach. The town of Kingston, Massachusetts, to whose selectmen this broadside is addressed, was an early and ardent supporter of the Boston Committee of Correspondence and the revolutionary movement. By 1774, the town had established its own committee, headed by John Thomas. During the course of the next year, Kingston armed and equipped thirty- three Minutemen to serve with a company from Plymouth County headed by Theophilus Cotton. By the end of the war, almost 100 Kington men would serve in the Continental Army. Kingston was also the site of the construction of the legendary American warship, the Independence, which wreaked havoc on the British Navy throughout 1776 before being defeated off the coast of Nova Scotia. The copy of this broadside at the American Antiquarian Society (addressed to the Selectmen of Concord), as well as the copy sold by Rosenbach in 1948 (sent to the Selectmen of Milton), are both somewhat defective, as is the present copy. Considering the purpose and nature of this document, it is not surprising that copies survive in less than ideal condition, especially given the fact that the text would have been positively inflammatory to British colonial authorities, and therefore was likely to be destroyed by Royal authorities. A rare and explosive colonial American broadside that helped unite the colonies and spark the Revolutionary War. BRISTOL B3428 (citing five copies). SHIPTON & MOONEY 42317. FORD 1608. ESTC W9556 (recording four copies). ROSENBACH 14:12. Seller Inventory # WRCAM56389