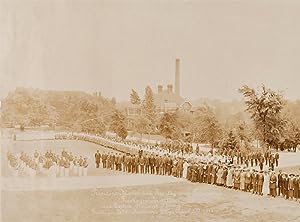 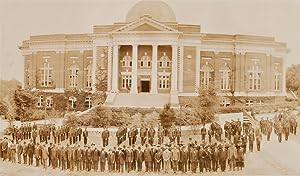 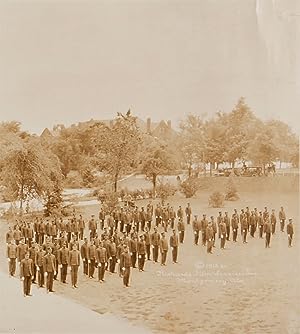 Panoramic photograph, 16 x 61 1/4 inches. A few creases and moderate wear. 13 1/2-inch closed horizontal tear into the image area from left edge, 2 1/2-inch closed horizontal tear at right edge just touching image area. Overall good condition. A substantial and striking large-format panoramic photograph depicting the faculty, trustees, and student body celebrating Founder's Day in 1918 at the Tuskegee Institute, one of the most august historically-black colleges in the United States. The image shows several hundred African American men and women ranged across the front of the main campus building, grouped by school. The band is at far left, along with the nursing students and other female students in the deep left background. The middle of the image features President Robert Russa Moton and his faculty and staff, with the Tuskegee color guard in formation directly in front of the main building, and across the right portion of the image. Many of the students in military uniform here represent the very first class of the Reserve Officer Training Corps at Tuskegee, as the school's ROTC program was founded in this year. President Moton took charge of the Tuskegee Institute after the death of Booker T. Washington in 1915, and served as its principal for the next twenty years. No copies of this panorama appear in OCLC, which lists just one copy of a different image of the campus on Founder's Day in 1918, also by Richards Film Service. A decidedly- rare and unusually-large panoramic photograph of the Tuskegee Institute just after World War I, the year it founded its ROTC program, and featuring everyone who worked, taught, and attended classes there in 1918. Seller Inventory # WRCAM56478

Title: PRESIDENT MOTON AND FACULTY WITH TRUSTEES OF...