Items related to Cities Back from the Edge: New Life for Downtown (Automation... 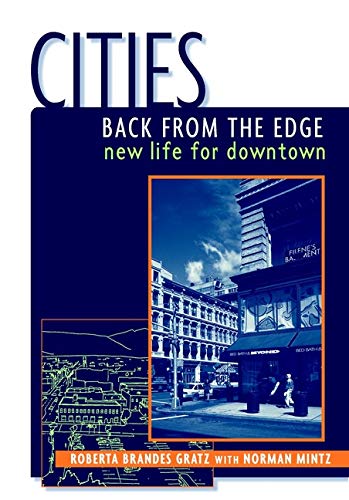 Cities Back from the Edge: New Life for Downtown (Automation) [Hardcover] Gratz,

Has some wear but is in Acceptable condition and is a very readable copy. Seller Inventory # SKU0006273

Title: Cities Back from the Edge: New Life for ...

"A love song for the city . . . [this] volume, attractivelypackaged and richly illustrated, is really a cookbook for downtownrevitalization." --Wall Street Journal

In this pioneering book on successful urban recovery, two urbanexperts draw on their firsthand observations of downtown changeacross the country to identify a flexible, effective approach tourban rejuvenation. From transportation planning and sprawlcontainment to the threat of superstore retailers, they address ahost of key issues facing our cities today.

Roberta Brandes Gratz (New York, NY), an award-winning journalistand urban critic, is author of the urban design classic The LivingCity. A former staff reporter for the New York Post, Gratz haswritten for the New York Times Magazine and other publications.Norman Mintz (New York, NY) has played a leading role in the fieldof downtown revitalization for more than twenty-five years. He isDesign Director at the 34th Street Partnership in New York City anda consultant on downtown revitalization across the country.

Many of America's downtowns are coming alive--again--through redevelopment to sustain growth into the 21st century. This book chronicles stories of how dozens of communities, downtowns, neighborhoods, main streets and big city business districts have revitalized buildings and businesses.