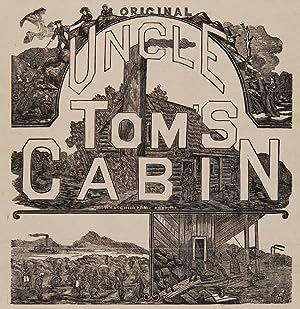 Illustrated broadside, 24 x 9 1/4 inches. Expertly backed with tissue, neatly mending a few closed tears (no loss of paper). Very good. Uncommon broadside advertising an upcoming performance of Parsons & Pool's long-running UNCLE TOM'S CABIN stage production, with woodcuts showing scenes from the play superimposed over an image of a cabin. Also advertised are the Tennessee Jubilee Singers, who regularly performed with the Parsons and Pool's troupe. Although Harriet Beecher Stowe never officially sanctioned a stage interpretation of her novel, theatrical versions of UNCLE TOM'S CABIN were wildly popular with American audiences during the entire second half of the 19th century and into the early 1900s. These "Tom Shows" existed in scores of different iterations, from moralizing melodramas to blackface burlesques, and were a staple of the traveling show circuit. Proclaimed as "the only company on the road to-day presenting the old-time manuscript version of UNCLE TOM'S CABIN." Parsons & Pool's productions can be classified among the moralizing melodramas. In one promotional pamphlet, the producers write that their presentations are "favorable to the development of the great principles of Christian brotherhood, and bringing to the knowledge and sympathies of the world, the lowly, the oppressed and forgotten." The Jubilee Singers began as the Fisk Jubilee Singers, an African-American a cappella ensemble composed of students from Fisk University, an historically black university in Nashville. They first organized in 1871 to tour and raise funds for the university. They sang traditional spirituals and other popular music, and toured along the Underground Railroad path in the U.S., as well as performing in England and Europe. The student group disbanded in 1878 and then reorganized as the Tennessee Jubilee Singers, a joint-stock touring group, in 1879, but retained their reputation as a refined group of performers, preserving and promoting African-American culture throughout the country. We found seven copies of this broadside listed in OCLC: Hamilton College, Library Company of Philadelphia, Yale, Clements Library, Middle Tennessee State University, University of Virginia, University of Wisconsin-Madison. LIBRARY COMPANY, AFRO-AMERICANA (2nd ed. Suppl.) 1655. OCLC 40817572, 701755423. Seller Inventory # WRCAM56236