Items related to The Memoirs of Richard Nixon 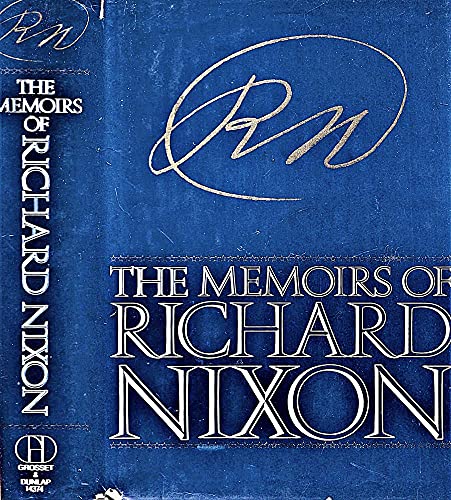 The Memoirs of Richard Nixon

Quantity: 1
View all  copies of this book
Buy Used
Price: US$ 125.00 Convert Currency
Shipping: US$ 4.00 Within U.S.A. Destination, rates & speeds
Add to basket

Third printing. Signed by Richard Nixon on the "This copy has been signed by the author" sheet just before the title page. No wear to blue cloth binding. Pages are tight and clean with no marks. No name of previous owner. No odor. No water damage. No soiling. Very, very slight touch of sunning to the spine. No wear to the matching blue cloth slipcase. No sunning of the slipcase. Seller Inventory # MP21-537Z

Title: The Memoirs of Richard Nixon

This is the autobiography of Richard Nixon, the thirty-seventh president of the United States. Before him only six men who have held the office wrote comprehensive memoirs. Now, here is Richard Nixon's self-portrait: a major work of autobiography, an extraordinary historical document, an intensely personal memoir.

Former President Richard Nixon's bestselling autobiography is an intensely personal examination of his life, public career, and White House years. With startling candor, Nixon reveals his beliefs, doubts, and behind-the-scenes decisions, and sheds new light on his landmark diplomatic initiatives, political campaigns, and historic decision to resign from the presidency.

Throughout his career, Richard Nixon made extensive notes about his ideas, conversations, activities, and meetings. During his presidency, from November 1971 until April 1973, and again in June and July 1974, he kept an almost daily diary of reflections, analyses, and perceptions. These notes and diary dictations, which are quoted throughout this book, provide a unique insight into the complexities of the modern presidency and the great issues of American policy and politics.