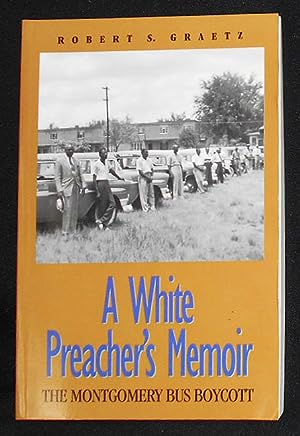 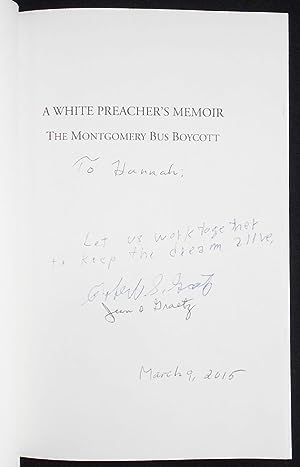 160 p.: illustrations; 23 cm. Paperback with illustrated cover. Gift inscription on half title page signed by the author, Robert S. Graetz, and his wife, Jean E. Graetz, dated 2015. Originally published as Montgomery: A White Preacher's Memoir in 1991. Robert S. Graetz (1928-2020) was the white minister of a Black congregation in Montgomery, Alabama, who was a friend of Rosa Parks and supported the Montgomery bus boycott, inspired by her arrest in 1955. In Near Fine Condition: edges slightly rubbed; clean and tight. Seller Inventory # 008275

At a time when it is easy to feel jaded about politics, race relations and religion, Graetz offers a time capsule with a potent humbling effect. In 1955, he was assigned as pastor to Trinity Lutheran Church in the black community in Montgomery, Ala., a conspicuous position for a young white man and his family, especially since they came from the North. Writing with the unassuming style of a country preacher, Graetz's gentle voice proves riveting in this account of the civil rights movement, looking outward from the eye of the storm. The book opens with a potentially devastating bomb attack on Graetz's house in retaliation for his involvement in the Montgomery bus boycott, which he and his family luckily survived. He chronicles the "brutal and dehumanizing treatment" of blacks for decades, often at the hands of the police, and the violent resistance against the new black movement for dignity, which culminated in a landmark Supreme Court ruling, only to usher in the battle to enforce it. Graetz knew Martin Luther King Jr. socially, Ralph Abernathy politically and Rosa Parks spiritually, as a member of his congregation. Having been invited to join all-black civil rights and clerical associations, Graetz often uses the term "we" when writing of the black community's struggle for human rights, though as a friend reminded him in the 1950s, as a white man he could always walk away. Risking reprimand by the church, Graetz drew more blacks to the Lutheran fold until he was called to a new post in Columbus, Ohio, in the summer of 1958. Rich with family stories and racial insights, this brief book leaves a lasting impression. Photos. (July)