Items related to The History of Magic: Including a Clear and Precise...

Home Levi The History of Magic: Including a Clear and Precise Exposition ...
Stock Image 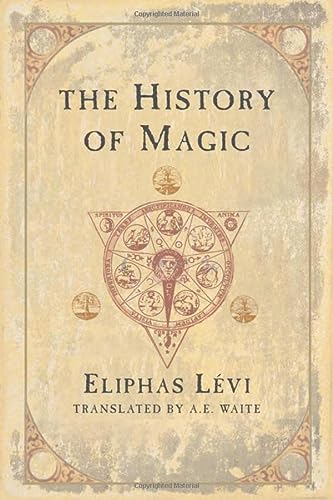 The History of Magic: Including a Clear and Precise Exposition of Its Procedure, Its Rites, and Its Mysteries

Quantity: 1
View all  copies of this book
Buy Used
Price: US$ 14.98 Convert Currency
Shipping: US$ 5.98 Within U.S.A. Destination, rates & speeds
Add to basket

Title: The History of Magic: Including a Clear and ...

First published in 1913, this classic text is an invaluable source book on the history and practice of magic and occultism. The contents include: Magic of the Magi, Magic in Ancient Greece, the Kabalah, Primitive Symbolism, Mysticism, Oracles, Magical Monuments, Magic and Christianity, Pagan Magic, Kabalistic Paintings and Sacred Emblems, Sorcerers, Magic and Freemasonry, the Illuminati, and more. Illustrated.

First published in French, this work by Éliphas Lévi (1810-75) was translated into English by occult historian Arthur Waite in 1913. In this book, Lévi traces Western magic from its origins in the ancient world to the nineteenth-century occult revival. Lévi's French edition is also reissued in this series.

WE DO NOT RECOMMEND money orders, checks or certified checks, AS THEY ADD AT A
WEEK TO TEN DAYS TO THE SHIPPING TIME. .

To pay with a credit card, simply use the credit option when checking-out on
Abe's website. WE DO NOT PROCESS CREDIT CARDS OURSELVES! Abe processes
everything, that is, WE NEVER SEE YOUR CREDIT INFORMATION.