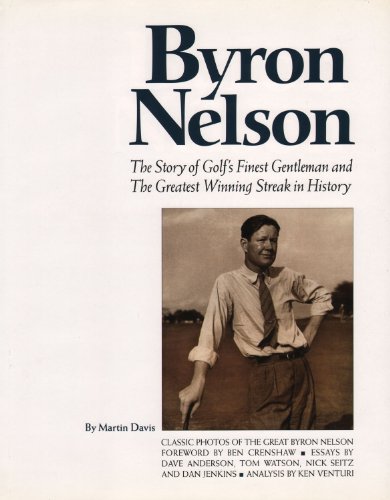 Quantity: 1
View all  copies of this book
Buy Used
Price: US$ 200.00 Convert Currency
Shipping: US$ 4.00 Within U.S.A. Destination, rates & speeds
Add to basket

Over-sized hardbound (folio). First edition stated and the printing numerals on the copyright page are a full line beginning with 1. Number 143 of an edition limited to 200 copies. Signed by Byron Nelson on the limitation page. AS NEW. No wear to the faux morocco binding. Pages are tight and clean with no marks. No name of previous owner. No odor. No water damage. No soiling. No sun fading. In an as new slipcase. Size: Folio - over 12" - 15" tall. Seller Inventory # MP21-167ZS

A lavishly illustrated, magnificently produced celebration of Byron Nelson, who was recently honored with the PGA's Lifetime Achievement Award--from The American Golfer, Inc., creators of the hugely successful book "The Hogan Mystique."

Byron Nelson, now 84 years old and living in Roanoke, Texas, set one of the most extraordinary records in sports history. In 1945 he won 18 tournaments, including 11 in a row. His record still stands today. Credited with developing the modern swing and recognized as one of the finest putters of all time, golf's true "gentleman" is a much-admired hero in the golfing world. Yet, little has been written about him and his remarkable techniques. Until now.

"Byron Nelson" presents the full story of Nelson's life and career, chronicling his path from his days as a caddie for Ben Hogan in Fort Worth, Texas, through the 54 PGA events he won as a professional golfer. With a foreword by Ben Crenshaw and essays by renowned sportswriters Dave Anderson, Nick Seitz, and Dan Jenkins and golfer Tom Watson, as well as analysis by Ken Venturi, and stats by Sal Johnson, "Byron Nelson" pays tribute to Nelson's lasting impact on the game.

Printed in Italy in six colors throughout and featuring elegant black-and-white photographs and a special eight-page double gatefold, "Byron Nelson" is the perfect gift for anybody who loves golf and appreciates the history of the game.

For a writer, formula can be dangerous. For a marketer, there's no harm in perpetuating what works. Martin Davis, a marketer par excellence in this niche, continues his run of golf tribute aces with a lovely appreciation of Lord Byron of the links. Like Davis's previous oversized homages to Ben Hogan and Bobby Jones, Byron Nelson is as big as a Tiger Woods drive, and as thoughtful as Ben Crenshaw eyeing a putt. Crenshaw doesn't do any putting here, but he does contribute a companion forward to the astute, if friendly, essays by Dave Anderson, Tom Watson, Nick Seitz, and Dan Jenkins. While the volume is large enough to accommodate the totality of Nelson's long, stellar career--a U.S. Open victory to accompany his pair of Masters and PGA titles--it zooms in strongly on his remarkable 1945 feat of 11 consecutive tournament victories, a standard matched only by Joe DiMaggio's 56-game hitting streak in its unapproachable majesty.