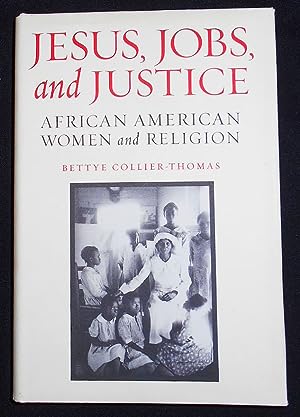 “The Negroes must have Jesus, Jobs, and Justice,” declared Nannie Helen Burroughs, a nationally known figure among black and white leaders and an architect of the Woman’s Convention of the National Baptist Convention. Burroughs made this statement about the black women’s agenda in 1958, as she anticipated the collapse of Jim Crow segregation and pondered the fate of African Americans. Following more than half a century of organizing and struggling against racism in American society, sexism in the National Baptist Convention, and the racism and paternalism of white women and the Southern Baptist Convention, Burroughs knew that black Americans would need more than religion to survive and to advance socially, economically, and politically. Jesus, jobs, and justice are the threads that weave through two hundred years of black women’s experiences in America.

Bettye Collier-Thomas’s groundbreaking book gives us a remarkable account of the religious faith, social and political activism, and extraordinary resilience of black women during the centuries of American growth and change. It shows the beginnings of organized religion in slave communities and how the Bible was a source of inspiration; the enslaved saw in their condition a parallel to the suffering and persecution that Jesus had endured.

The author makes clear that while religion has been a guiding force in the lives of most African Americans, for black women it has been essential. As co-creators of churches, women were a central factor in their development. Jesus, Jobs, and Justice explores the ways in which women had to cope with sexism in black churches, as well as racism in mostly white denominations, in their efforts to create missionary societies and form women’s conventions. It also reveals the hidden story of how issues of sex and sexuality have sometimes created tension and divisions within institutions.

Black church women created national organizations such as the National Association of Colored Women, the National League of Colored Republican Women, and the National Council of Negro Women. They worked in the interracial movement, in white-led Christian groups such as the YWCA and Church Women United, and in male-dominated organizations such as the NAACP and National Urban League to demand civil rights, equal employment, and educational opportunities, and to protest lynching, segregation, and discrimination. And black women missionaries sacrificed their lives in service to their African sisters whose destiny they believed was tied to theirs.

Jesus, Jobs, and Justice restores black women to their rightful place in American and black history and demonstrates their faith in themselves, their race, and their God.

Bettye Collier-Thomas is Professor of History at Temple University and a fellow at the Woodrow Wilson International Center for Scholars. She is the author of Daughters of Thunder: Black Women Preachers and Their Sermons and the editor (with V. P. Franklin) of Sisters in the Struggle: African American Women in the Civil Rights–Black Power Movement. She lives in Cherry Hill, New Jersey.