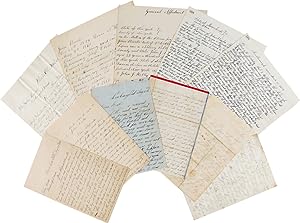 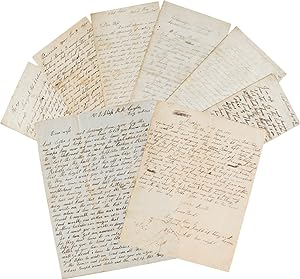 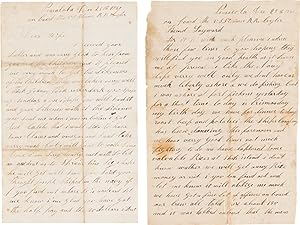 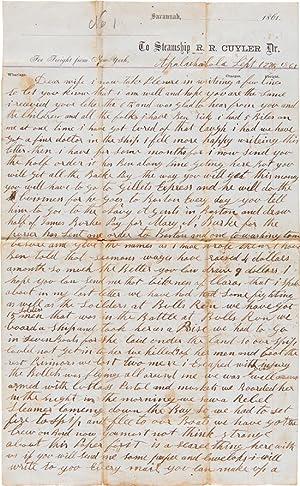 [COLLECTION OF LETTERS AND MANUSCRIPT DOCUMENTS WRITTEN BY JOHN BURKE, MOSTLY WHILE SERVING WITH THE UNION NAVY DURING THE CIVIL WAR, BUT SOME WRITTEN AFTER THE WAR, WITH SEVERAL PASSAGES DETAILING NAVAL PRIZES WON FROM THE CONFEDERACY AND OTHER UNION NAVY MATTERS]

Twenty-one autograph letters, signed, and manuscript documents, totaling approximately fifty-one pages. Old folds, many with slight tears and slight separations along folds and at cross folds. Overall, in good plus condition. An interesting collection of manuscript material providing a view of the Civil War from the vantage point of Union Navy sailor, John Burke. About half of the material in this collection consists of letters written by Burke (who sometimes refers to himself as "James") during the war, though some are from the period after. The archive consists of twenty-one letters and manuscript documents, including eleven from Burke (seven written to his wife, Mary Burke), and ten letters or documents written to Burke from Mary, his brother Joseph, and others, or written about Burke, including later manuscripts relating to Burke's claim for an invalid pension from the U.S. Navy. Burke's wartime correspondence covers his activities aboard various steamers, where he reports on his movements around the Gulf Coast, encounters with the Confederates and brief reports of battle action, and, most importantly, about capturing numerous valuable naval prizes from the enemy. John Burke was born in Dover, New Hampshire on Christmas Day in 1834. He was a shoemaker hailing from Newburyport, Massachusetts, who served in the United States Navy during the Civil War on the following ships: the U.S.S. Mississippi, the U.S.S. R.R. Cuyler, U.S.S. Massachusetts, and the U.S.S. North Carolina. He enlisted May 9, 1861 at the Charlestown Navy Yard and served largely in the Gulf Coast region during the war. He was discharged from the Navy in April, 1862 at the Brooklyn Navy Yard. Thereafter, he worked as a merchant seaman aboard numerous steamships. Burke's letters are full of details on his movements, actions, requests for items from home, and more (original spelling will be retained in any excerpts that follow). In one of his earliest letters, from the U.S.S. Ohio, Burke asks his wife for several items, including his favorite shirt, a brush, ink, paper, and silk. He also writes about the seemingly haphazard way he ended up in the Navy: "How I come hear I got drunk and a man took me to Boston Shipped me. The first knew about it I was on bord the Ship. But we must make the best of it until my time is out.Tell the boys I am agoing to get Jef Davis's head." He signs this letter, as he does in a few other cases, "John Burke alias James Burke" (the reasoning for which is unclear). In another letter from around this time, Burke writes to his brother at Elkridge Landing, Maryland about fishing, coming home to see Mary after he gets paid, and about how he and his fellow soldiers [the Sixth or Eighth Massachusetts Regiment, or Cook's Boston Artillery Battery] are on a hill overlooking the relay house at Elkridge Landing. The next letter is from August, 1861, when Burke writes to his wife from the U.S.S. R.R. Cuyler, a steamer outfitted by the U.S. Navy as a gunboat assigned to the Union blockade of the Confederate States. He joined the crew of the ship after his previous ship, the cutter John Appleton, was damaged and lost. Burke writes that "we are not at Tampa Bay now we are going to Apalachacola to be stationed their we have taken 6 Prizes. We lost the John Appleton that I was in and we burned the hull to the waters edge so the Rebels could not get her off." Here, he further relates that his captain "told us all that served 6 months in this war wold get 320 acres of land worth one dollar an acre. That would be $320 Dollars besides our wages. That will not be bad." He also hears that "they are having some hard Battles in Virginnia." Burke again writes from Florida after arriving in Apalachicola. He relates to Mary about recent action: "We have had Some fighting.we board a ship and took her as a Prise. We had to go in seven Boats for she laid under the land so our ship could not get in to her. We killed 7 of her men and took the rest Prisinors. We lost tw. Seller Inventory # WRCAM56211